I am afraid of Manju

I am afraid of Manju 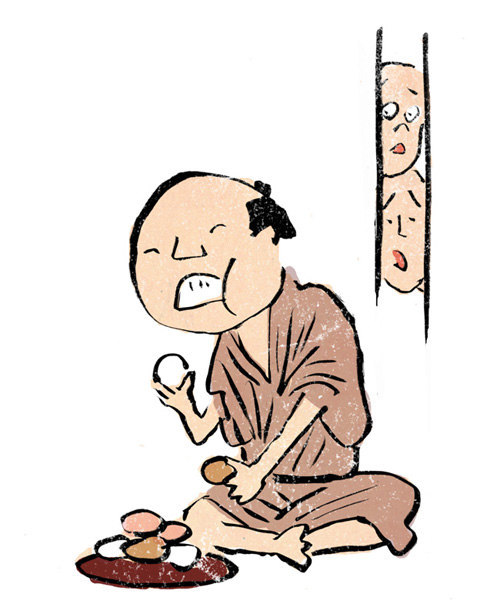 Everyone there but a young man spoke what he was afraid of.
The man was lying himself on Tatami(straw mats used in Japanese house).
“Mr. Pine. What are you afraid of?”
“Afraid! I have nothing to be afraid of.”
“Aren’t you afraid of snakes, spiders, ghosts?”
“Of course, not.” said he, sitting up.
“A snake! When I have headache, I tie it around my head. It’s cool.”
“A badger! If a ghost appear, I’ll make it cook, wash and clean.”
“A spider! I mix it into Natto(fermented soybeans eaten in Japan) and stir it.”
“A bat! I’ll make an umbrella of it.”
“A caterpillar! I’ll tie it on a stick and brush my teeth.”
“Ants! I’ll scatter about them on rice instead of sesame.”
He suddenly stopped speaking.
“What’s the matter?” asked one of his friends.
“I remembered one I am afraid of.”
“What is it? Do tell me what you are afraid of.”
“I’m, I am, afraid, of, Man, Manju(bun stuffed with sweetened paste).I am afraid of Manju.”

“Manju? What kind of animal is it?”
“It’s not an animal. It is sold at a candy shop. Oh, the mere thought of it makes me feel sick.”
His face became paler and paler.
“I can’t sit up any more. Would you make me a bed in the next room?”
He went to the bed, covering his head with bedclothes.
Hearing and looking at him, everyone there smiled, discussed and decided to play a trick on him.
Some of them went out buying Manju in the town and returned with many kinds of Manjus.
Sake Manju, Hot Spring one, Soba(buckwheat) one, Chestnut one, Red and White one, Funeral one, Meat one and so on.
Putting them on a wooden tray, they carried it near the bed secretly and waited for him to notice it.
“Hey, Mr. Pine. Wake up! It’s time we broke up this meeting.”
“I see. I’ll get up, but don’t tell me about it any more.”
“All right. We never talk about it.”
There was a cry from the room.
“Oh, my God! It’s Manju. So many Manjus.”
Everyone in the next room was satisfied to hear his cry.
“Shame on you! Why did you do me harm? You broke your promise. I’m afraid of Manju. Very afraid of Manju.”
The louder he cried, the more they laughed at him.
“Oh, this is a Sake Manju. I’m afraid. afraid….”
“Oh, this is a Chestnut Manju. I’m afraid, afraid…. Oh, I am afraid of all manjus. Delici…. Afraid….. ”
They noticed something was strange with him and peeped into the room.
“He looks happy. He is eating Manju. We were tricked by him. Hey, Mr. Pine. What on earth are you afraid of?”
“I am afraid of a cup of delicious Green tea.”