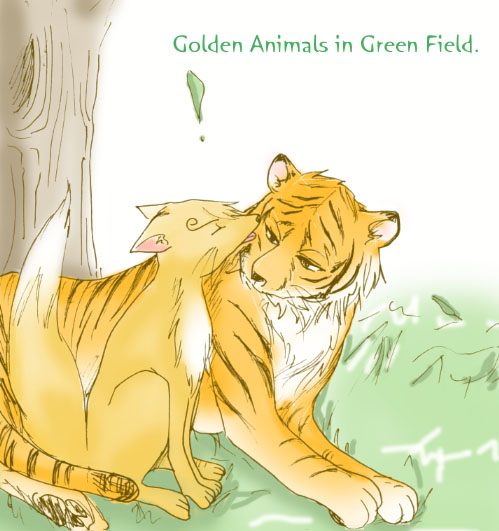 Long long ago, there lived a very big tiger in China.
He was so big that other animals called him ‘Giant Tiger’.
They were so afraid of him that they always flattered him, saying,
“You are not only very big but also very smart, Giant Tiger.
You must be the smartest animal in the world.”

So he believed he was not only very big but also smart.
One day an old tiger said to him,
“You are smart all right, but I heard that there’s an animal called a fox in Japan.
They say it’s a very smart animal, maybe even smarter than you.”

After that, Giant Tiger couldn’t stop thinking about this smart animal, the fox.
He still believed he was the smartest animal in the world, but he couldn’t stand other animals whispering about the ‘Smart Fox’ behind his back.

At last he decided to go to Japan to meet the animal.
He wanted to challenge the Smart Fox to protect his honor.
It was difficult for him to swim across the Japan Sea, but he eventually managed to reach the shores of Japan.
He then immediately visited the fox in a forest, and said,
“You are Smart Fox, I assume.
I’m pleased to meet you.
I’m Giant Tiger from China.
They say you are smarter than I am, but I believe I’m the smartest animal in the world.
The reason I’m here is to show you that I am in fact smarter than you.”
The fox was a little surprised, but remained calm and said,

“All right, If you say so, I’ll race you from here to the edge of the forest.”

The proposal pleased the tiger.
Running was his strongest talent.
He was big but not fat, so he could run fast like lightning.
He thought he was unbeatable.
“On your mark, get set, go!”
the fox declared, and the two animals ran as fast as they could.
Needless to say, the tiger ran faster than the fox.
He believed he would be the winner.
As the goal came into view, to his surprise, he spotted a fox-like shape running far ahead of him.
“Is that the fox running ahead of me?
I can’t believe it.
How can the fox beat me?”
the tiger growled.

The fox reached the goal and cried,
“I won, I won!
Mr. Tiger, you have to admit that I beat you.”

The tiger couldn’t accept the fact that he had lost the race so cried,
“Let’s do it again.”
The two decided to have a return race.
“On your mark, get set, go!”
the tiger declared.
“I can’t lose this race. Never!”
he said to himself.
As soon as he had declared “Go,”
he started running like lightning.
This time the starting line of the previous race was the goal.
He ran and ran.
He didn’t see the fox anywhere in the view ahead of him, so believed he was certain to win the race.

However, when he was about to reach the new goal, the fox came into view.

The tiger couldn’t believe his defeat.
“Let’s do it again,”
he forced out the words.
And so they kept racing again and again.
He didn’t know how many times he competed in the race with the fox, but at last he became breathless and gave up running.
The fox, however, was still ready to go and never looked tired.

Can you figure out the trick the ‘Smart Fox’used?
There were two foxes, one at either end of the race, the starting point and the goal.
The tiger was so discouraged that he returned to China.
He never tried to compete with anyone again.
He never forgot the fox either, smaller but smarter.
He sent a tiger cat to Japan to take revenge on the fox, but a cat was not able to do distinction of a fox and a rat.
Giant Tiger had only said,
“Smart Fox is small, and runs around the forest very fast.”
So whenever the cat found rats it used to catch and kill them.
These days cats are treated as beloved pets, and owners feed them high calorie food.
Isn’t it lamentable that they become fat and forget the role of catching rats and killing them?
If the Giant Tiger knew this, what would he think?