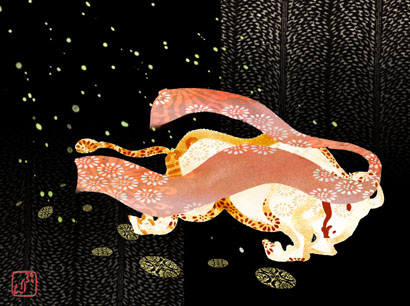 Long long ago, there lived a young widow in Shinano Province (Nagano prefecture),
where there was a temple called Zenkoji.
Her husband had died a few years before.
She was so sad that she could no longer believe in any God or Buddha.
She’s never visited the temple since the time of her husband’s death.
One sunny day she was working in the field with a towel wrapped around her head.
All of a sudden a big bull appeared from nowhere and rushed wildly toward her.
She cried loudly and jumped aside.
Luckily she just managed to avoid the bull.
She was dumbfounded for a while.
But she saw her towel sitting on the bull’s head.
When she jumped aside, it dropped from her head and landed on the bull’s horns.
The bull circled the field twice and ran away with her towel on his horns.
She got angry and tried to chase it to get it back.
She ran and ran after it.
But the bull ran much faster than she did.
Before long she couldn’t see the bull clearly.
It blurred and soon disappeared.
She was out of breath from running after it so hard.
She stopped to take a deep breath, then looked around and found herself standing in the grounds of the Zenkoji-temple.
“What’s that?”
She found something written on the ground.
It seemed like it was written with the saliva of the bull.
It said,
Believe in Buddha.
It depends on your religious belief whether you’ll go to a heaven or a hell.
She got a strange feeling, She felt as if someone was beckoning her to come over.
She stepped forward toward the main building of the temple.
She saw a priest reciting a sutra in there.
In fact she hardly understood the meaning of the sutra, but she felt a sense of blessing.
In no time her eyes were filled with tears.
“How badly I’ve behaved!” she realized.
From then on she believed in Buddhism.
She paid a visit to the temple frequently and prayed for her late husband and her happiness in the next world.

A few days later, she planned a tour to worship the jizo statues in and around her village.
(A jizo is a stone Buddhist statue set along roadsides across the country to protect children and travelers.
It is about one meter tall.)
When she approached the first jizo, she saw something white on its head.
She looked at it closely.
“Oh, this is exactly the towel I lost the other day.”
The jizo was standing with a benevolent look on its face with the towel.
Suddenly she realized that the jizo had disguised himself as the bull to guide her to the temple.
It struck her with awe.
She came to believe in Buddhism all the more, and wanted to enter a religious life.
She knew it was not an easy task for her to become a nun.
But she had no children or parents to take care of.
“There’s no reason to hesitate to be a nun,”
she told herself.
I don’t know she really became a nun or not.
Even if she didn’t, I’m sure she spent a good life after that.
By the way, do you believe in Buddhism?