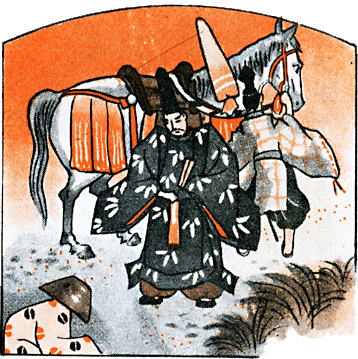 One day when the young man took a bath and the girl scrubbed his back with a washcloth, he happened to peep at her face covered with the wooden bowl.
He didn’t expect to see such cute round eyes.
“She is the most attractive girl I’ve ever seen.
I’ll make her my wife,” he inwardly decided.

The two gradually got along well with each other.
His mother, who knew her son’s decision, of course got against their marriage.
“We don’t even know where she was born and raised.
Oh…that ugly wooden bowl she is wearing!
I’m afraid your marriage wouldn’t go well.
I can’t understand why you have chosen her of all women,”
she complained.

The young man said,
“I understand why you object to our marriage.
But whatever may happen, I’ll marry her.
If you drive her out of here, I’ll also leave with her.

The worried mother planned to have a ‘Bride-Contest’ to compare her youngest son’s fiance to the wives of her three sons, so that the ugly young woman would feel ashamed and leave from the house on her own initiative.

The handicapped young woman said to her fiance,
“I’m so sorry to say that I have to leave here soon.
I’m sure you’ll find a much better woman than I.”

“Don’t tell me such a wistful thing.
I love you better than anyone else in the world.
I’ll live with you until our death separates us.”

The moment he said so, the wooden bowl fell down in front of her.
He was fascinated with her beauty: a fair-complexion with lovely round eyes; long black hair and … he gazed at her speechlessly for a while.
What’s more, in the box she had had on her head a moment before, they found treasures such as gold, silver, beautiful clothes and rolls of silk cloth!

“You don’t need to go anywhere,” he said to her gently.

The ‘Bride Contest’ started at last.
First, the eldest son’s wife appeared in front of their relatives.
She was a beautiful woman with long hair.
She brought five rolls of silk cloth with her as the guests’ gifts.
Next, the second son’s elegant wife appeared.
She also brought five rolls of cloth.
And then the cute third son’s wife showed up with five rolls.
The relatives said to one another,
“We’ve already seen three son’s wives.
Each of them is so beautiful, hardly to say which is the best.
Now it’s the turn for the youngest son’s fiance, but I wonder if she has the courage to appear in front of us.”

At last the slide door opened.
Quietly and gracefully she walked into the room with five rolls of silk cloth.
In a beautiful kimono, she looked so elegant and bright as if she had been the spirit of cherry blossoms under the spring sunshine.
She was polite in manner, too; quite different from that bath attendant working everyday.
All the people in the room watched her without a blink.
The former three women were all beautiful, but in her presence, they paled by comparison.
Soon there took place a splendid banquet.
During the banquet, the three wives murmured with each other.
The eldest son’s wife said to their parents-in-law,
“I think it’s time to show our specialty to the guests.
I’ll play the biwa (Japanese lute), the second son’s wife, the tsuzumi (small shoulder drum), and the third son’s wife, the sho (Japanese wind musical instrument).”
Then she turned to the youngest woman, and said,
“So would you mind playing the koto (Japanese musical instrument with 13 strings) with us?”
“I don’t think I can play the koto well in front of the guests, but if you insist, I’ll try,”
she said modestly.
To their surprise, she finished playing a difficult piece perfectly.
All the people there cried out in admiration.
Then the three women gathered again and talked about something.
The second wife approached her and said,
“Look at the garden.
How beautiful the cherry blossoms are!
Would you mind writing a waka poem (a form of classic Japanese poetry) for us?”

“I don’t think I can please you with my poem, but if you insist, I’ll try.”
After a while of thought, she started writing a poem with beautiful handwriting on a strip of paper, and read it in a clear voice.

Although the cherry blossoms can’t speak to you,

Listen to what they say with your inner ears.

If you endure through all the hardships,

In the future, you’ll surely have good years.

The young man’s parents sympathized with her, thinking about her hardships she’d had to go through.
They recognized not only she was elegant and beautiful, but also well-educated, qualified enough to their son’s bride.
Though the young woman had never confessed her background, they thought there wasn’t any barrier for their marriage any more.
Soon she had three children and lived a happy life with her husband.
One thing she felt anxious about was her father.
She heard from someone that her father had left his family to train himself as a priest and wander somewhere, and that the main reason he had decided to be a priest was his second wife’s ruthlessness and careless spending.

She wanted to look for her poor old father and show him his grandchildren.

Meanwhile, the priest prayed to Kannon wherever he visited temples,
“If my daughter is still alive, I’d like to meet her again, and apologize for my stupidity.”

One day, he was praying at a temple, when he saw a man with three children walking toward him.
Looking at them, he burst into tears.
The man was surprised and asked the priest,
“What makes you cry?”
“Please don’t mind my crying, but your children bear a striking likeness to my daughter whom I ran out of my house when she was thirteen years old.”

The old priest told the whole story to the man, who sympathized with the priest.
When the man took the priest to his house, his wife gazed at him for a while, and shouted with joy,

“Oh, Father, I’m your daughter.
Look, he is my husband, and they are your grandchildren.”

“I must be in a dream,”
the priest said,
“If not, I have to thank Kannon for rejoining my daughter.”
He was welcomed by his daughter’s family, and lived with them happily ever after.