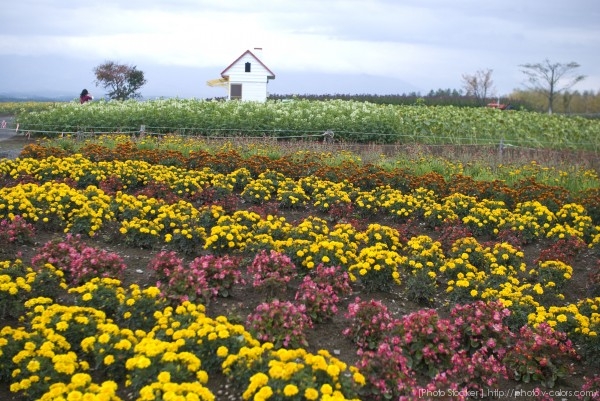 Long long ago, there lived a little girl who loved flowers in a village.
Her parents also loved flowers and took care of them every day.
Many kinds of beautiful flowers came out all year round not only in their garden but also around their house: lilies, sunflowers, chrysanthemums and so on.

The girl was named Yuri (Lily) because her parents wanted her to be a lovely girl like a lily.
People liked to see their flowers and their daughter Yuri.
In fact, the flowers and Yuri’s smiling face soothed them and cheered them up.

Years went on, Yuri became a beautiful girl.
She had been taking care of flowers instead of her busy parents.
One day early in autumn, she caught a bad cold with a high fever.
She had to stay in bed for a month.
A number of flowers in her garden had been withering day by day.
A month later, she finally got over her illness, and went out to see the flowers.
What she saw in the garden was nothing but some withered stems.
She was so shocked that she stood perfectly mute.
She wanted to tell her parents how she felt, but she couldn’t.
he lost her voice.
Her parents were worried about it and went to see doctors in and out of the village.
They asked the doctors how she could regain her voice, but nobody knew of any medicine or any effective cure for it.
They even asked fortunetellers to help their daughter.
One of them suggested that they should plant as many lily bulbs as they could.
They began to plant lily bulbs in the fields, hills and by the river.
The villagers were puzzled by it at first, but soon they understood what her parents were doing, and offered to give their hands.
They planted hundreds of lily bulbs before the winter came.
Next spring the village was covered with many kinds of beautiful lilies.
One of the villagers visited Yuri’s place.
He brought a bunch of lilies.
Her face became reddish with joy.
She took a look at the lilies in his hands, and opened her mouth slowly.
It seemed like she wanted to say something.
Her parents and the villager stared at her.
Then again her lips moved.
A miracle happened.
“Lilies.” The word came out from her lips!
The lilies caused a miracle.
The villager and Yuri’s parents admitted the hidden power of flowers, which gave people pure, warm and happy feelings.
Then the people in the village started planting flowers around their houses, fields, and hills.
Before long, people named the village the ‘Village of Flowers.’