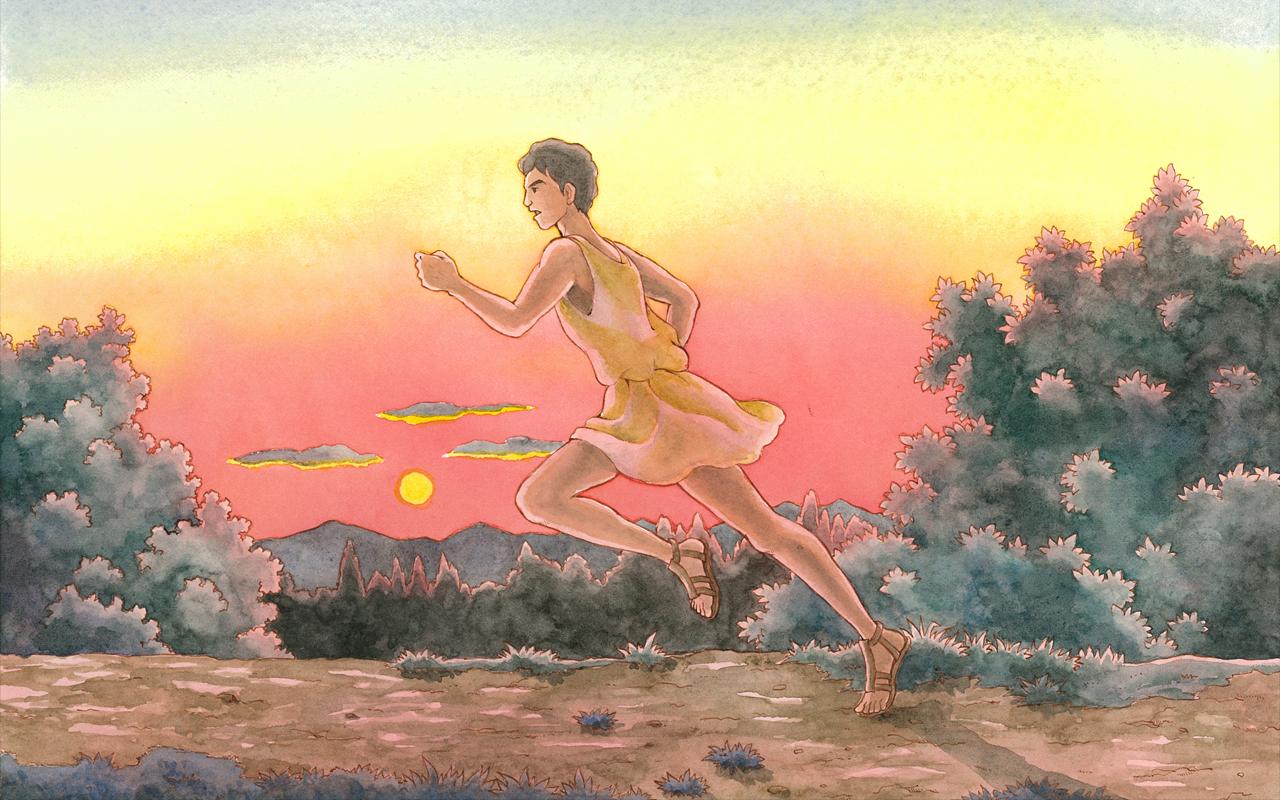 Melos was enraged.
He determined he would definitely get rid of the cruel, ruthless king.
Melos hadn’t had to do with politics.
He was only a herdsman in a village.
He spent everyday playing the flute and taking care of sheep.
Yet he was more sensitive to ruthlessness than other people.

He left the village before dawn, got across the fields and hills, and reached the city of Syrucs which was forty kilometers away from his village.
He had no father, no mother, no wife, but a sixteen-year-old shy sister, who was going to marry an honest herdsman in their village in the very near future.
Melos came to the town to get her wedding clothes and food for the feast.
He had a childhood friend, Selinuntius, who was a stonemason in the city.
He also planned to visit his old friend expecting to have a pleasant talk after a long time separation.
At first, he bought things for the wedding and then he walked along the avenue in the capital.
While walking, he noticed there was something weird with the air in the town.
It was so quiet and quite different from what it had been two years before.
It was after sunset, so it was already dark.
Even so he felt too lonely around there.
Melos became uneasy.
When he came here two years ago, he had enjoyed the city’s lively atmosphere;

people had been singing until midnight.
He asked a young man what had happened.
The man shook his head and said nothing.
He asked an old man he met next on the street and asked him the same question with emphasis.
At first the old man didn’t answer either.
Melos shook the man’s shoulders with his hands and asked again.
The old man answered a bit in a low voice as if he was afraid of being heard by others.

“Why does he kill people?”
he asked.

“The king believes everyone was harboring an evil thought.”

“Has he killed many people?”

“Yes, he has: at first he killed his sister’s husband;
and his heir; and then his sister; next her children; then his wife, and his right-hand man.”

“Oh, what a terrifying story! Is the king deranged?”

“No, he isn’t.
He said he can’t believe others.
Recently he has doubt about his subjects’ minds.
He ordered those who lived in a showy way to offer a hostage.
If they refuse it, they will be crucified.
Six people have been killed by now.”

“He is an appalling king! I won’t let him get away alive.”

He was a straightforward person.
He plodded along and entered the castle with his burden he had bought on his back.
He was soon caught by the patrols and questioned.
They found that he had a dagger in his inside pocket and it turned into a big uproar.

He was brought in front of the king.

“What did you intend to do with this dagger? Answer me.”
the tyrant Dionysius pressed for an answer quietly but stately.
The king’s face was pale and his brows were knitted deeply.

“I’ll save the people in this city from you, a tyrant,”
Melos answered without disconcertment.

“Will you?”
the king smiled with pity,
“You are a hopeless fool. You don’t understand my loneliness.”

“It is the most shameful vice to doubt people’s minds.
You even doubt your people’s loyalty.”

“You are the one who showed me ‘Harboring suspicions is the right readiness.’
One can never depend on what people think in mind.
People are self-interest personified.
You never believe others, ”
the tyrant calmed down and muttered with a sigh,
“I wish I had a peaceful life.”

“What do you want from peace?
Do you want peace to protect your throne?”
Melos subjected to ridicule scorn,
“How dare you say so while you’ve been killing many innocent people?”

“Shut up!
You, a lowborn fellow!”
the king raised his face and said,
“You can speak of clear things, but I can see through people’s minds.
I won’t accept your cry and apology when you get nailed in a crucifixion.”

“Oh! You talk knowingly.
You think too highly of yourself!
I’m determined to die and never to beg for my life. But…,”
he looked down on his feet, and hesitated to say a bit,
“if you want to show your kindness to me, give me a three-day stay before my execution.
I want to let my sister marry: let my sister and her fiance have a wedding ceremony.
Then I’ll come back here within three days.”

“Ridiculous!”
the king laughed low and hoarsely,
“You’re telling an outrageous lie.
Are you saying ‘A bird which you set free will come back again?”

“Yes, it will,”
Melos insisted frantically,
“I’ll keep my word.
Give me a three-day stay.
My sister has been waiting for me.
If you can’t believe me, I’ll leave my best friend here as a hostage instead of me.
He is a stonemason in this town.
If I do not return here by the sunset on the third day, you can execute him.
I beg you for my sake.”

Hearing this, the king chuckled to himself with a brutal thought,

How impudent he is!
I know he’ll never return here.
I’ll pretend to be taken in and set him free and execute his friend on the third day.
I’ll say to his friend with a sad face, ‘This is why I can’t believe people.’
I want to show my opinion to those in the world who profess to be an honest person.

The king said to Melos,

“I’ll grant permission to you.
Bring your scapegoat here and come back by the sunset on the third day.
If you are late, I’ll kill your scapegoat without fail.
Return here a little late, and you’ll be forgiven forever.”

“Ha-ha! If you want to survive, come here late.
I know what you are thinking in mind.”

He stumped his feet in vexation.
He didn’t want to say anything to the king any more.

His childhood friend Selinuntius was brought into the castle at midnight.
They met each other for the first time in two years in front of the brutal king.
He told his friend the whole story.
Selinuntius said nothing, but nodded and hugged him tightly.
That was the way between best friends.
Selinuntius was bounded hand and foot with a rope and Melos started immediately for his village.
It was early in summer, the sky was heavily sprinkled.