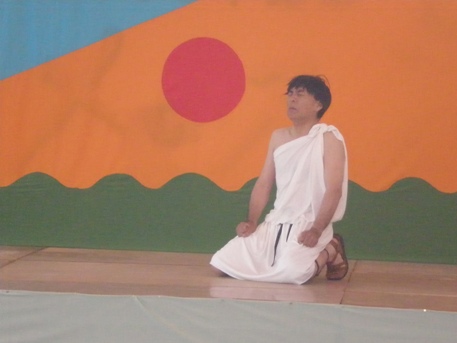 He hurried and hurried back to the village all the night without getting a wink of sleep to cover 40-kilometers, and finally reached there the next morning.
The sun was already high above him.
The villagers started working in the field.
His 16-year-old sister was taking care of sheep instead of her brother.
She was surprised to see his tottering steps; he was exhausted.

“What’s the matter with you?”

“Nothing!”
he tried to smile at her,
“I still have something to do in the city, so I have to go back there again soon.
Your wedding ceremony will be held tomorrow.
The sooner, the better.”

She blushed to hear it.

“You look happy.
I’ve bought you beautiful clothes for your wedding.
Go and tell the villagers that your wedding is tomorrow.”

Melos staggered along the road and got back home.
He set up an altar and prepared for the wedding.
After that he fell down on his bed and fell into a deep sleep.

It was evening when he woke up.
He hurried to her sister’s fiance and asked him to have a wedding the following day for some reason.
Her fiance shook his head and said that he hadn’t prepared anything for the wedding: he wanted to have it after the harvest of grapes.
But Melos insisted he couldn’t wait, and said,
“Tomorrow is the only day for me for the wedding.”
They kept arguing until dawn.
Melos finally talked her fiance into having the wedding the following day.

The wedding was held in broad daylight.
When they were just about to finish swearing the marriage in front of the attendance, the sky was covered with the dark clouds.
Soon it began to rain, and then poured down.
Those who were present at the wedding felt something ominous, but soon they enjoyed the wedding party until midnight, drinking, singing and dancing in his small house.
Melos, his face was full of smiles, forgot the promise between the king and him for a while.
He wanted to keep living a happy life there with those great people.
He wanted to stay at his house as long as possible.
But he strained his energies.
He thought he had enough time until the next day’s sunset.
He made up his mind to leave for the town after having a nap.
It would become light until then.

He said to his sister,

“Congratulations on your marriage!
Well, I’ve been tired and need to take a nap. br />
After waking up, I have to leave for the town as I have important business there.
Even if I’m not with you, you have a kind husband now.
As you know, what I hate most is to doubt people and tell a lie.
Never keep a secret between you and your husband.
That’s what I want to tell you.
I’m so proud of you.”

She smiled and nodded.
Then he patted her husband on the shoulder,

“I have nothing valuable but my dear sister and dozens of sheep.
I’ll give it all to you.
You are now Melos’s brother-in-law.
You should be proud of it.”

Melos exchanged greetings with the villagers who attended the party, smiling at each other, and left from the party to sleep at his sheep pen.
Soon he slept like a log.

He woke up in twilight next day.
Melos jumped out of bed.

-Oh no! Have I overslept?
No, I have still enough time, haven’t I?
If I leave here right now, I’ll get to the castle in time I promised.
I’ll show the king the people’s truthfulness and credibility.
After that I’ll be crucified with a smile.-

Melos took his time and started to get dressed.
The rain seemed to let up.
Melos shook his arms with a swishing sound, and started running in the rain like an arrow.

It was so painful for him to leave there.
He tended to stop a few times.
He encouraged himself in a loud voice.
Across the fields, through the forests, when he reached the neighboring village, it stopped raining and the sun rose high and it began to get hot.
He wiped the sweat with his fist.

-I’ll be all right as I’ve already got here.
I don’t regret giving up my hometown any more.
My sister will be happy with her husband.
I don’t have anything to worry about.
All I have to do is go straight to the castle.
I have enough time, so I don’t need to hurry.
I can take time to walk-

He took back his happy-go-lucky air, and started singing with a nice voice.

When he reached the middle of the route, an unexpected disaster befell him.
He abruptly stopped.
Because of yesterday’s heavy rainfall, the source of the river flooded, and the muddy stream flew to the downstream widely and swiftly.
It carried away the bridge across it, and its bridge girder was knocked and shattered into pieces.
He was petrified in dumb surprise.
He looked around, and cried as loudly as he could.
But there was no boat, nor ferryman there.
The swelling stream was becoming like the sea.
Melos couldn’t suppress his tears, rose his hands up and appealed to God.

“Oh, would you pacify the furious flood?
The time has been passing quickly.
It’s already noon.
If I can’t get to the castle by the time the sun sets, my best friend will be killed for me.”

The muddy stream swelled more, the waves were surging.
He had no time to kill.
He made up his mind to swim across the river.

-Heaven be my witness!
I’ll show my strong might of love and faithfulness that defeats the muddy stream-

Melos plunged into a river and fought with waves which tossed and raged like a hundred monster serpents.

He put all his strength into his arms and pushed his way across the surging and swirling current.
His furious battle against the water might make God take pity on him.
He at last clung to the trunk of a tree and got to the opposite shore.

He shook himself dry like a horse, and then hurried forward.
There was no time to lose.
The sun was about to sink in the west.

Wheezing, he finished climbing the mountain pass, and soothed his breast, when a gang of bandits suddenly leaped out.

“What are you doing?
I have to go back to the castle before sunset.
Let me go!”

“No, you can’t.
Leave everything you have here!”

“I have nothing with me except my life, which I’ve promised to give to the king.”

“That’s exactly we want, your life!”

“You want my life?
That means you were waiting for me here under the order of the king.”

Without saying a word, they raised their heavy sticks all together.
He ducked and covered, swiftly attacked one of them, and snatched his stick.

He assaulted fiercely, knocking three men down.
While the rest of them were frightened, he ran down the pass without stopping.
He was so tired under the scorching sun in the afternoon that he felt dizzy several times.
He pulled himself together, and staggered a few steps.
At last, his knees trembled and he fell down on a field.
He couldn’t stand up again.
He looked up at the sky and cried with frustration.

-Ah! Melos! A true brave man, Melos, who swam across the muddy stream, knocked down three bandits, ran like a shot to come here!
What a shame I’m too tired to move here! -

-Your best friend believes you, and will be killed soon.
You are a notorious unbelievable man.
That would be playing right into the king’s hands-

His strength had already withered and he couldn’t move forward even for an inch.
He lay down on the grass.
When you are tired physically, your spirit will also be damaged.

-What does that matter? -

An ill-natured mind, which was unsuitable for a brave man like him, grew.

-I made every effort.
I had no intention off breaking the promise.
I call heaven to witness!
I tried to do it as hard as I could.
I am not a faithless man.
Ah, I would cut my breast to show my red heart if I could, the heart which is moving only with love and truth.
But I used up every ounce of energy at this serious moment.
What an unlucky man I am!
People will surely laugh at me.
They will also laugh at my family.
I deceived my friend.
Sinking to the ground on the way is the same as doing nothing from the beginning.
What’s the difference?
Oh, this may be my destiny.
Selinuntius, forgive me!
You’ve always believed me.
I’ve never deceived you.
We’ve been really best friends.
We’ve never had suspicious black clouds in our minds.
At this moment you must be waiting for me single-mindedly.
Thanks, Selinuntius.
You’ve thoroughly believed me.
This is more than I can bear.
The sincerity between friends can be the treasure we should be proud of most in the world.
Selinuntius, I ran.
I didn’t have a speck of intention to deceive you.
Believe me! I hurried and hurried to come here.
I passed through the bandits’ enclosure and ran down the pass without stopping.
Nobody but I did.
Ah, don’t hope more to me.
Leave me alone.
Anyway I’ve lost!
I am a slacker.
Laugh at me!
The king whispered into my ear if I came late, he would save me but the scapegoat would be killed instead of me.
I hated his meanness.
Now I’m doing as he told me.
I’ll go there late.
The king will jump to a hasty conclusion, laugh at me, and release me.
If things will go there, I’ll rather die than suffer like this.
I’ll be a traitor forever.
I am the most disgraceful kind of man in the world.
Selinuntius, I’ll die.
I’ll kill myself with you.
I’m sure you are the only one who believes me.
Well, that may be also my self-satisfaction.
Or I would rather survive as a villain.
I have my house in the village.
I have tens of sheep, too.
I never think my sister and her husband will expel me from the village.
What trifle things justice, honesty and love are!
People kill someone in order to live themselves.
That’s the established rule of mankind.
I begin to feel all the things that are ridiculous of me.
I’m a disgraceful traitor.
I don’t care what’ll happen anymore.
Alas! -

He stretched out his legs and arms, and dropped off into a doze.