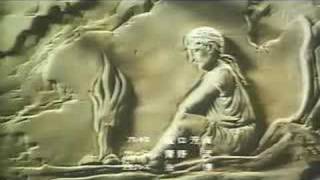 Melos happened to hear the sounds of water flowing.
He gently raised his head, and strained to hear it.
It sounded like the water-flow which was just under his feet.
He staggered to his feet, and found it gushing from a crack in a rock.
He stooped to cup water from the crack, drank a gulp, and gave a long sigh of relief.
He felt he’d woken up from a dream.

Recovering from physical exhaustion gave him a slight hope: a hope to fulfill his duty;
to kill himself for maintaining his honor.
The sinking sun made leaves and branches around him glitter.

-There’s still some time left before sunset.
The man at the castle is patiently waiting for me without any doubt, quietly expecting me coming back.
He believes me.
My life is not an important matter.
I can’t be self-centered such as I’ll make an apology with my life for what I’ve done.
I must reward him for his confidence in me.
That’s the only thing I must do.
Run, Melos.
He believes me!
He believes me!
That temptation by the Devil must be a dream, a nightmare.
Forget it!
When you get exhausted all over, you happened to dream such a nightmare.
Melos, that’s not your disgrace. br />
You are still a true brave man.
You’ve got to stand up and run again.
How lucky I am!
I can die as a man of honor.
Oh, the sun is setting, setting rapidly!
Stop it, Zeus!
I’ve been an honest man since I was born.
Let me die as an honest man. -

Melos ran like the wind: pushed his way through the crowd on the street;
rushed through a group who were a midst of their feast in the field and made them dumbfounded;
gave a dog a kick, and jumped over a brook.
He ran ten times faster than the gradually setting sun.

The moment he passed through a group of travelers, he caught an ominous conversation,

“That man must have been sent to the gallows by now.”

-Oh, that man!
I’m running desperately in order to save that man.
Don’t let him die.
Hurry up, Melos, don’t be late!
You should show the king the power of love and faith!
I don’t care about my appearance.-

Melos was now almost stark naked.
He couldn’t breathe; he spit up blood a few times.

-Look! I can see the tower in the distancee-

At last he saw the tower in Syracuse which was lit up with the setting sun.

He heard a groan on the wind.

He asked without stopping running.

“I’m your friend Selinuntius’s apprentice,”
running after Melos, the young stonemason said to him,
“It’s too late.
It’s no use!
Please stop running!
You can’t save his life any more!

“It’s about time my master is executed.
You are late.
I will hold a grudge against you.
You should have come a little earlier, a little bit earlier!”

He was staring at the big evening sun with a heartbreaking feeling.
He had no choice but to run.

“Stop it!
Stop running!
Your life is important now.
My master always believed you.
He was calm even when he was taken on the gallows.
When the king made fun of your friend, he said that Melos would surely come.
It seemed like my master had a firm belief.”

“That’s why I’m running.
I’m running because he believes me.
It isn’t important whether I’ll be in time or not.
Lives don’t matter either.
I’m running for more dreadfully great thing for some reason.
Follow me!”

“Alas! Are you getting mad?
If you insist, run as hard as you can.
You may just possibly be in time to get there.
You’d better run!”

The sun hasn’t set yet.
He gathered all his energy and ran.
He didn’t have the slightest idea in his head: he had nothing to think about.
He kept running as if he was being pulled by some unknown great power.
When the sun was half sinking above the horizon and its afterglow was about to vanish, he dashed into the execution site like the wind.
He was just on time!

“Stop it!
Don’t kill that man.
Melos has come back.
As I promised, I’ve come back!”

He cried with a loud voice to the crowd at the execution site, but actually only a horse voice came out of his mouth, so nobody noticed he had come back.
The cross had already been prepared, and Selinuntius, bounded with rope, was about to be raised.

“I’ve come back, executioner!
It’s me who should be hanged, Melos!
I’m the one who made him the scapegoat,”

He shouted to the utmost with a hoarse voice.
When he finally reached the cross, Selinuntius was gradually being raised.
Melos clung to his friend’s feet.

His unexpected appearance caused a stir among the crowd.
They shouted each and every mouth

“Selinuntius,”
said Melos with tears in his eyes.
“Hit me on my cheek with all your might.
I once dreamed a nightmare on my way back.
Unless you hit me, I have no right to hug you. Hit me!”

Selinuntius nodded, as if he understood everything, and hit him on his right cheek with a loud sound,
which sounded through the execution site, then gently smiled at him,

“Hit me, Melos!
Hit me on my cheek as hard as I did.
During the three days, I once had a doubt of you.
I doubted you a bit for the first time in my life.
Unless you hit me, I have no right to hug you, either. Hit me!”

Melos hit his friend on his cheek with a hum of his arm.

They said unanimously, hugged each other tightly, and cried bitterly with joy.

The sounds of sobbing were heard among the crowd.
The king was staring at the two behind the crowd.
The blood rushed to his face.
Soon he silently approached them, and said,

The crowd burst into cheers.

A girl handed a scarlet cloak to Melos.
He was embarrassed.
His friend made him notice that he was standing there without a stitch of clothing.

“You are stark-naked, Melos.
You’d better put on that cloak.
This pretty girl feels frustrated because of your naked body being seen by people.

The brave man blushed with shame.

The original author is Osamu Dazai.