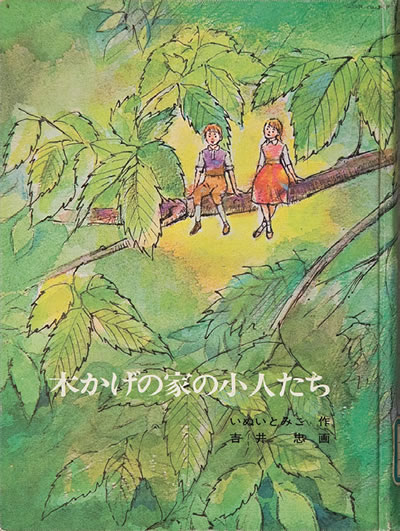 Long long ago, there lived a man and his three sons in a village.
The man worked hard, and his sons helped him a lot.
So he gradually got more rice fields and other properties.

One day he called for his three sons in his room, and said,
“Sons, you aren’t boys any more but fine young men.
I think it’s time for you to learn how to live in the future,”
he continued,
“I’ll give each of you three years and some money to find your future.
I don’t mind where you go, or what you learn.
But you should learn something useful for your future.
The man who learns the most impressive skills shall have my property as my successor.”
The eldest son Ichiro said,
“Father, I want to inherit your property as I am your first son.
I’m sure I’ll learn the best skills among us three.”
He started his journey to develop the best skills.
The second son Jiro said,
“Father, I’m the most dexterous boy of the three.
I’m sure I can find some useful skills, which will please you most.”
He also started his journey to find something useful.
The youngest son Saburo said nothing.
He didn’t know where to go, or what to learn.
So he started quietly.
Three years later, they returned home.
Ichiro said to his father,
“I learned archery and how to shoot allows.
I can shoot an apple on the tree over there from here with an arrow from my bow,”
saying so, he shot an apple on the tree down with a single arrow from his bow.

“Bravo! You made it! You must be the best archer around here.
I’m impressed.
But what have you learned, Jiro?”
asked their father.
“I learned how to weave fine textiles and sew kimonos for the nobles.”

Jiro showed the fine textiles he’ve woven.
He started sewing a kimono with it.
Before long he finished sewing.
There in his hands, was a beautiful kimono.

“This is for you, Father.
Why don’t you try it?”
The old man put it on.
It fitted him perfectly.
“Bravo! Good work, son. It impressed me a lot. So what did you learn, Saburo?”
Saburo had only worked for an old woman, mowing the grass, cutting trees and performing other chores every day for three years.
He had nothing to be proud of.
He was sitting, bowing his head, and staring at the tatami mat.
Just then he heard a faint voice whispering to him,
“Say to your father, ‘I learned how to steal.'”
The voice came from the old red bowl in his inner pocket.
Saburo said to his father in a loud voice.
“I learned how to steal.”
Well, I’m sure you want to know more details about what Saburo had done during his travel after he left home?

He had visited several villages trying to find something useful to do, but he couldn’t find any.
One night he was wandering through a forest.
“What shall I do?”
he thought in the dark.
To his great relief, he found a light in a small hut.
He knocked on the door and found an old woman sitting beside the hearth.
“Excuse me, but would you mind my staying here tonight?”
“No problem, but tell me first who you are and why you are traveling?”
she asked.
“I’m traveling to fine something useful and learn it as I was told to do so by my father.”
he said.
“Have you already decided what you are going to learn?”
she asked.
“I haven’t decided yet.
If you know a good job or a good place to work, please tell me.”

He worked hard for her from morning till night every day, mowing grass, cutting trees and so on for three years.

Strangely, however, his kimono got neither dirty nor torn.
Wishing to go home, he made it dirty and tore it on purpose.
He said to the old woman,
“This kimono has become dirty and torn, so let me go home as you promised me three years ago.”

“Indeed, it’s dirty.
As you have worked very hard for me for three years, you can go home.
By the way, I’ll give you something as a reward.
As you know, I have nothing special to give you but the old red rice bowl you have been using every day.
You’ll find it very helpful some day. Keep it.”
It was very old and a small piece of the rim had broken off.
The young man put it into his inner pocket.
He was headed to his father’s home after three years of absence.
He said to himself,
I wonder what I’ve learned for the last three years.
I don’t know how to answer my father’s question.”
Desperately, he took the red bowl out, and threw it away into the field with his mighty strength, and kept walking.
Then he heard someone whispering to him,
“Saburo, wait for me. Saburo, wait for me.”
He stopped to look around, but no one was there.
“Saburo, wait a minute. Saburo, wait a minute.”
He stopped again, then he heard the voice third time.
“Saburo, wait. Saburo, wait.”
“Who is calling me? Don’t make fun of me.”
While he had stopped, to his great surprise, the red bowl he had thrown away came rolling down to him, and jumped into his pocket by itself.
No matter how many times he threw the bowl away, it never failed to jump back into his inner pocket.
At last, he gave it up throwing it away, and walked home with it in his pocket.
Now, sitting before his father, his uncle and his two brothers, he was about to answer the question.
“I learned to steal.”
“What! Stealing?”
everyone there was very surprised.
“Yes, I learned to steal.”
he said again in a clear voice.
His uncle, who was a millionaire, said to him,
“You think stealing may help you in your future life?
All right. I’ll test your ability to steal.
Come to my place tonight.
All you have to do is steal my safe.
If you succeed in stealing it, you can have everything in it.
But if you fail, you’ll be captured as a thief and punished in a prison.”
When he was at a loss what to say, the red bowl in his pocket whispered to him,
“Say ‘Yes’.”
He said in a loud voice,
“Yes, I’ll do it.”
At midnight, Saburo was standing in front of his uncle’s house.
He saw all the doors and windows tightly closed and guarded by his uncle’s employees.
His uncle was in his room sitting beside the safe.
More men were guarding horses in the stable, so that no one could carry the safe away on horseback.
“What shall I do?” he said to himself.
The bowl whispered to him as he was expecting.
“Saburo, throw me inside over the fence.”
He threw the bowl into the garden of the house.
He saw the bowl change into a dwarf with a head, arms and legs.
It sneaked into the room where the safe was protected.
Saburo’s uncle sitting next to the safe had started dozing.
The dwarf easily bound him with a rope and put a gag on him.
“A thief has entered. Turn on the light!”
the uncle cried.
But as he was gagged, he couldn’t speak clearly.
His men were foolish enough to take ‘Turn on the light’ for ‘Ride on the horse.’
They carried their master from the room to the horse in the stable, meanwhile the bowl-dwarf succeeded in carrying out the safe without any difficulties.

Sabro’s uncle had to admit defeat.
Later the safe returned to his uncle with all the money still in it.
So Sabro wasn’t a thief any more.
His father was greatly impressed by his skill.
Saburo inherited his father’s property as his father promised.
Since then, the magical red bowl gave him many suggestions on how to grow rice properly and make money legally.
Before long he became a millionaire.
His eldest brother worked for a lord as an expert archer.
And the second brother ran a kimono fabrics store.
The three brothers worked hard and lived happily ever after.