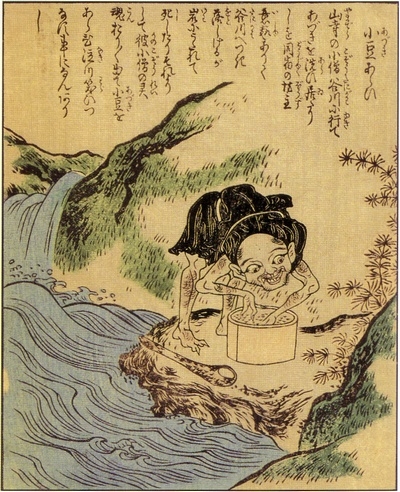 Long long ago, there lived a pretty girl in a mountain village.
One day in spring she went gathering warabis (or edible wild brackens) with her friends on a mountain.
She found plenty of warabis, gradually forgot herself and deeper and deeper got into the forest.
At last she lost sight of her friends.
It started getting dark.
She had to face the fact that she was lost.
“Anybody out there?
I’m here,”
she cried.
Only echoes replied.
She kept wandering in the forest trying to find her way home.
When she found a light in the distance she was relieved, and rushed towards it.
It was a shabby old hut.
But she didn’t hesitate to knock on the door.
“Excuse me, but I’m lost in the forest.
I’m so tired that I can’t walk any more.
Would you open the door and let me in?
If you allow me, I’d like to stay here overnight with you,”
she cried,

“Come in, the door isn’t locked.”
The voice came from inside.
“Thank you. I appreciate your kindness.”
The girl timidly opened the door and stepped into the hut.
She found an old woman with gray hair sitting beside a hearth.
Her eyes were shining, her mouth was very big-almost from ear to ear-and two sharp fangs made the woman look like a witch.
The girl was frightened but she pretended to be calm.
She tried to smile, bowed to the woman, and said ‘hello’.

The old woman said to the girl,
“Sit down there. I don’t think you know of me or of this house.”

“No, nobody told me about you.
This is the first time I’ve entered deep into this forest.
I got lost and was too tired to walk and then I saw your light in the distance,”
said the poor girl in a trembling voice.

“Maybe you are thinking I am a mountain witch,”
the old woman grinned and continued,
“I am a witch that eats human beings.
Aren’t you scared at me?”
she seemed like she was enjoying scaring the girl.

The girl kept staring at the witch.
She was so afraid that she couldn’t help murmuring something.
“Even if you are a witch or a monster, I don’t care.
Please allow me to stay with you tonight.
I’ll do anything for you if you want,”
she sobbed.

“You look so tasty I want to eat you,”
said the witch with a loud, frightening voice and licked her lips.

“Even if you want to eat me, I’d like to stay here,”
the girl said in a scarcely audible voice.
The monster burst into laughter and said,
“Your words please me.
You are the first person who has ever wanted to stay with me.
I wanted to eat you just a minute ago, but now I feel like you are my old friend.”

After laughing, the witch was quiet, thinking a while and said to the girl,
“Sorry. I can’t allow you to stay here tonight, because I would be accused of breaking the witches’rule.
But it is almost midnight.
If I drive you out into the forest, you’re sure to be eaten by bears, wolves, or other mountain witches.”

Then the witch brought an old cloak from the recess and showed it to the young woman.
“This is a witch’s cloak.
As you’ve pleased me so much, I’ll give it to you.
It’s a magic cloak.
Once you wear it, you can be anyone you want to be.
Just say their name.
Furthermore, if you imagine what you want to eat, you can get anything.
Try it to make sure that I’m telling the truth.”

The girl put the cloak on and wished to eat two rice balls.
To her great surprise, two rice balls appeared in front of her at once.
She ate them to her heart’s content.
“I think it’s time you left, before the other witches notice I am with you,”
said the witch.
“Since witches hate to eat old people, I suggest you disguise yourself as an old woman.”

Watching the girl changing into an old woman, the witch said,
“Now you’ll be safe. You don’t look very tasty any more.”
Leaving the hut, the girl disguised as an old woman plodded through the forest.
The stars were twinkling in the night sky.
The witches in the woods spotted her easily.
They suddenly came out of the bush and surrounded her.
“Help me!” , she cried.
Her voice was hoarse exactly like an old person’s.
The witches frowned when they listened to her cry and looked at her wrinkled face.
One of them said to the others,
“She is very old-all skin and bones.
I’m sure she doesn’t taste good.
I don’t want to eat her.”
They agreed and disappeared immediately.

She climbed down to the foot of the mountain all through the night and at last reached a village.
She happened to visit the largest house around there.
She entered the gate, opened the door and said to a man who came to answer ‘Hello’.

“I happened to pass by this village on my way home.
As a matter of fact, I lost my way in the mountain last night and I don’t know where I am now.
I don’t want to disturb you but I’m so tired that I can’t walk any more.
Would you mind my taking a rest somewhere in your house for a while?”
“Oh, poor old woman. Come in, please.”
The man was in fact the master of the house.
He felt sorry for the old woman and was kind enough to lead her into a room.
“Take a good rest in this room for as long as you want.”
The old woman took the cloak off and fell asleep at once.
Soon the master’s son returned home and found a beautiful young woman sleeping in the room.
“Who is she? I’ve never seen such a beautiful young woman in my life,” he asked his father,
“What are you talking about?
I am the one who led her into the room.
I don’t think she is young.
In fact she is pretty old.
Hmm, but on second thoughts, if you were right, she must have been a fox or something else.
We need to make sure.”

They rushed into the room.
But the young woman didn’t panic.
After a good sleep, she had enough wits to tell them her unbelievable story, and show them the magic cloak.
Her whole story convinced them that she was simply a beautiful young woman.
The head of the house helped her find the way home.
The master’s son continued to visit the young woman.
Eventually they fell in love with each other and lived happily ever after.