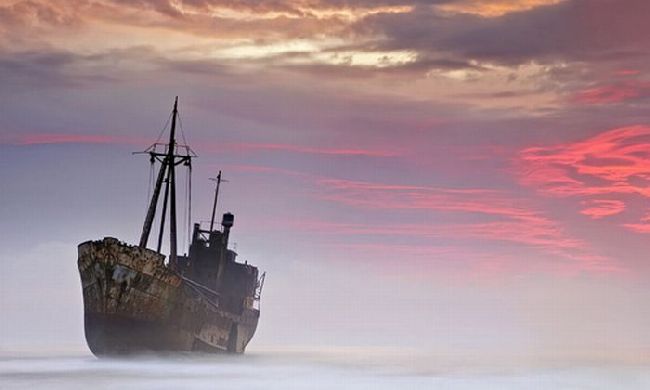 Long long ago, there was a tradition handed down in a fishing village;

You must never set out a boat into the sea on the Bon Festival night (the Buddhist festival of the dead at midsummer in July or August).
If you sail your boat, your dipper will be taken and your boat will be filled with water to sink.

The old believed this saying, but the young never believed it.

“It’s just a superstition.
For those who catch fish, there is neither the Bon Festival nor the New Year’s holidays.”

A few spirited young fishermen set out on a boat into the offing on the Bon Festival night.
The sea was calm and the stars were twinkling in the sky.

They cast a net in the sea, singing a song.
When they finished doing it, a man cried, pointing at the offing,

They saw dark clouds coming to them.

“The weather is turning bad!”

They quickly pulled the net out of the sea.
Then they heard a weird voice from the clouds which were coming nearer and nearer.

“Damn it! We aren’t going to wait. Hurry up and haul ashore quickly,”
some one replied.
When the cloud almost reached the boat, it moved in a spiral in the sky, and then turned into a big ship,
which sailed up to them silently on the sea.
They had never seen such a strange ship before.

“Look! It has a dragon’s head on the bow.
It must be a foreign ship,”
a man said.

Hundreds of torches were lit all over the ship in no time, and the sea around the ship was illuminated, and glittering.

“How beautiful! It is beyond description!”
another man said.

While they were fascinated by it, the strange ship came closer and closer to them.

“It’s strange. I can’t see anyone on that ship,”
someone said.

When the ship was coming to the point of hitting their boat, they heard a weeping and groaning voice,

Cold shivers ran up and down their spines.
They remembered the old people’s warning.

If your dipper is taken, your lives are also taken.
You shouldn’t give your dipper to anyone.

“Hide your dipper, hurry up!”

When they cried, the ship’s hundreds of torches floated gently and flew to them, and surrounded their boat.
A white hand came out of each torch and said,

“Who will be drowned?”

“Who will fall into company with us?”

Then hundreds of white hands grabbed the sides of their boat firmly, so it couldn’t move.

“Give us your dipper…”

“Give us your dipper…”
A ship ghost’s white hand touched gently to one of the young men’s faces.

The man unconsciously threw his dipper into the sea.
Then the dipper turned into tens of hundreds of dippers.
Each ship ghost grabbed a dipper, drew water from the sea, and poured it into the boat.

All the young men on the boat cried for help like mad.
In spite of their cries, the white hands never stopped.
The boat was about to sink into the sea.

Then a lot of big blazes at the beach climbed up into the sky.
Those were sacred fires to welcome departed souls.
The blazes became a red cloud and flew toward the ship ghosts as if it were a creature.
Over the ship ghosts, it spread all over the sky, and the sparks shot up into the air.
The red blaze cried,

“You, foreign ghosts, calm down!”

“Look at the Bon- fire on the beach.
We are the ghosts of the fishermen killed in the sea.
So are you.
We are similar to each other.
Don’t play tricks on the living! Disappear! Get lost!”

Hearing this, the white long hands began to shrink into the torches of the ship.
The foreign ship with hundreds of torches disappeared into the offing.