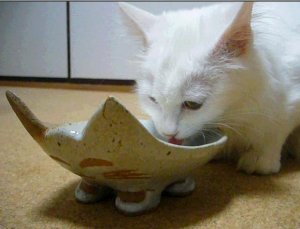 Once upon a time, there lived a old woman who ownned the tea house at a certain mountain pass and kept one cat.
Although the cat was just like any other, it was allowed to eat from the most precious teacup, further more it was something anyone would go to great lengths to get their hands on it.
One day, a rich master who was resting in the tea shop was surprised to see it.
He thought.
“Casting pearls before swine really does seem to apply in this case.
This old lady surely doesn’t know the value of this teacup.”
The rich man decided somehow to get his hands on the cat’s teacup for himself.
The master approached to the cat, stroked its head and spoke out.
“What a lovely cat this is. It truly is wonderful.”
“Really? It spends the whole day, lying around doing nothing. Its nothing but a useless cat.”
“I disagree. It really looks like a very clever cat. Further more, its fur is so shiny.
If it is possible, I was wondering if you could give me that cat? “
“Well, if you will lovingly look after the cat, then I will give it to you.”
Upon hearing these words, the man believed he had succeeded.
All he needed now was for the old lady to include the precious teacup with the cat.
“So, for how much do you think you can let me have the cat for?”
“Well, since it is a cat, I can not sell him for much, but lets say you give me a silver coin for my troubles.”
“What? A silver coin! “
(What a crazy old hag she is, asking me for a silver coin for such a dirty old cat)
mumbled the man to himself.
But the teacup he so wanted was worth far more than one or two silver coins.
“Ok then. I will give you one silver coin.”
The rich man then took out one silver coin and handed it to the old woman.
This is where the man realized his chance.
“By the way, I was also wondering whether I could also have that teacup there?
Since I believe the cat would rather eat from a teacup it is used to than a new one.”
The old lady spoke sharply and refused his request.
“No, there is no way I can include the teacup .This is one of my most precious possessions!”
(Damn! This old lady knows the true value of the teacup)
The man was bitterly disappointed at this and shouted out.
“If the teacup is so special to you, then why do you use it as a cats eating bowl?”
“Well, its my choice to how I should use it! Now, take your cat and be off with you quickly.
No matter how much you offer me, I simply will not part with my teacup!”
Since there was nothing the man could do, he picked up the cat and walked out of the teahouse.
But in truth the man really hated cats.
“Hey, Im so angry! Damn cat, get out of my sight! “
The man then threw the cat away on the middle of the mountain pass.
The cat span around in the air, landed safely back on its feet, then flew off at great speed back to the teashop.
“Good cat. You came back to me.”
The old lady then picked up the cat and over and over again, stroked its head.
“Because of you, we made more money again.
That’s the twentieth silver coin we’ve made so far.
The end