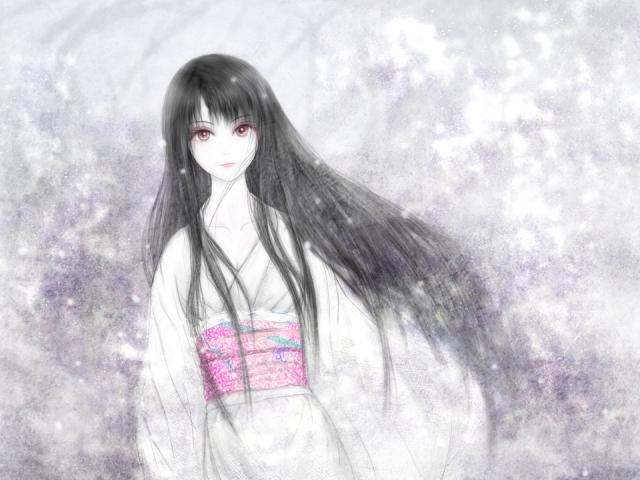 Once upon a time, in the cold northern country…
there lived an old logger named Shigesaku, and his son, Onokichi.
Every year, when the mountains was covered by white snow, they were used to take their rifle and to go hunting.
One day, while they were out, vicious clouds rolled in and they found themselves in the middle of a blizzard.
Fortunately, they were able to find a small hut.
“We have no choice but to spend the night here.”
The son agreed.
They were both tired, and while listening to the crackling of the fire, soon fell asleep.
The hut’s door, pushed by the strong wind, was slammed opened…
and in an instant the fire was put out.
“Brrr…. It’s cold!”
The chill awoke Onokichi, and it was then that he saw the figure of a person.
“Who is there?”
From the darkness emerged a young and beautiful woman.
“You are the Snow Woman!”
She stood above Shigesaku, and began to slowly exhale a white frost.
As the frost reached his face, his body slowly became paler and paler.
The old man died peacefully in his sleep.
The Snow Woman was now moving toward Onokichi.
“Please, spare me.”
Just as he was about to try to run, she spoke to him softly.
“You are young, and full of life.
I will spare you.
But, if you should ever speak to anyone of this night, your precious life will come to an end.”
With that being said, the Snow Woman vanished with the blowing wind.
Onokichi fainted.
He awoke the next morning to find his dead father, lying beside him, frozen.
One year later…
on a very rainy day, there was a young woman standing in front of Onokichi’s house.
“You are soaking wet!.”
Being the kind man that he was, he brought her in from the rain.
She said her name was Oyuki.
Onokichi and Oyuki were married, and blessed with beautiful children. They had a very happy life.
The only problem was that Oyuki couldn’t stand hot days. She would collapse in the heat.
But with the help of her tender and caring husband, life went on as normal.

One day, as Onokichi was watching his wife do needlework, he was reminded of that day, long ago.
“Oyuki, once before I have met a woman of your beauty.
You look just like her.
It was in the mountains, in a blizzard.
She was the Snow Woman.”
Oyuki became noticeably sad. She said to her husband…
“I have always feared that you would one day break our promise.”
”Oyuki, what are you saying?”
Before his eyes, Oyuki’s clothes became the color of the snow.
“Because you have spoken of that day, it is no longer possible for me to live as a human.
I will never forget you.
Thank you for everything.
Please take care of our children.
Goodbye…”
A cold wind opened the door with a slam.
Then, the Snow Woman vanished with the wind.