The old man of cherry blossoms

The old man of cherry blossoms 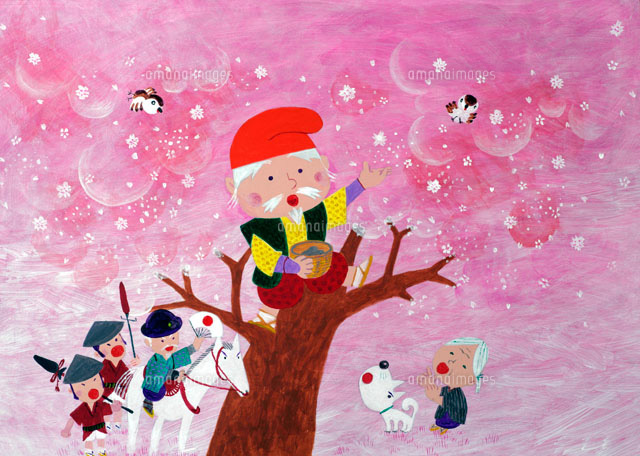 Long,long ago, there lived a kind old man and his wife in a mountain hamlet.
One day, when he was working in the field, a puppy ran to him for help
A jealous old man ran after athe dog.
“Help me,or I’ll be killed by my master.”said the puppy.
“What’s the matter with you?” asked the honest man.
“This morning I happened to eat fish bought by him.” said the dog.
“This is my dog. He ate my fish. I’ll kill him.”interrupted the jealous man.
“Please forgive this dog. He didn’t know that the fish was yours.
By the way,would you mind selling this dog.” asked the honest man.
“I have given him much food. Well,I’ll sell him if you accept my proposal.” said the jealous man.
“OK. I’ll be willing to pay for him.” said the honest man.
Now the dog belonged to the honest man.
The honest man and his wife loved him.
He named the dog “Pochi”.
One day he went up to a mountain with Pochi.
Suddenly Pochi barked.
“Dig here,dig here,bow-wow.” cried the dog.

“Is there anything here? OK,I’ll dig here.” said he.

“Oh my God! I found a lot of gold coins. Thank you,Pochi. What a wonderful dog you are!”
Hearing this event,the jealous man took Pochi in secret and took him in a mountain and made him bark.

“Dig,here.” said he in a small voice.
“Ok,I dig here,and I’ll find gold coins and I’ll be a rich man.” said the man.
“Ok,I found a box. Snakes in the box! I kill you, Pochi!”
Pochi was killed by the jealous man.
The honest old man felt very sad for Pochi and made a grave for him in the garden.
Soon a strange thing happened.
A great tree grew up from the grave and a strange voice was heard from somewhere.

“Make a mortar of this tree.” said the voice.

So he cut down the tree and made a mortar.
When he put rice into it, a strange thing happened again.
The rice changed into the gold coins.

Hearing this, the jealous old man and his wife took the mortar and put rice into it, but nothing happened.
They in anger burnt it.
The honest old man and his wife were very disappointed to see the ash and came home with it.
This ash, however, was the ash that could make cherry trees flower.
One day he was invited to the house of lord’s.
When he threw it around standing between the branches of cherry trees, they suddenly started to blossom.
Seeing this,the lord was very pleased and gave him much reward.
The jealous man knew this soon and went to the lord.
“I am the most wonderful old man who can make the cherry trees blossom.
I can show you the most beautiful cherry blossoms on all of your withered cherry trees.” said the jealous man.
He threw his ash about.
But nothing happened.
What was worse, the ash entered the lord’s eyes.
The lord got very angry and put him into prison.