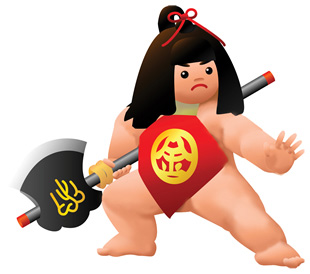 Long, long ago, in a mountain called ‘Mt.Ashigara’ there lived a young boy called ‘Kintaro’ and his mother.
His father had been a samurai, a warrior in the Capital but he was caught and killed in a battle.

His mother, who ran away from the enemy, brought Kintaro into the deep mountain.
“I must make my son a brave samurai like my husband at all cost.” said she to herself.
The two hid and lived in a cave.
She picked up the fruits or nuts or berries for his food instead of good meals.

Though she had been very beautiful, she now lost her beauty.
Her beautiful clothes became dirty and worn out, but she loved him and took care of him well.
Soon he grew up to a high spirit lad.
Everyday he played sumo wrestling with many animals living in the mountain.
He threw away one animal after another.
“Dear Bear, it’s your turn. Come on!”
He wrestled with the huge bear, which was no less strong than he was.
After a long match, he defeated the bear.
After the wrestling, he ran in the forest with animals.
He was taught how to climb trees by a monkey, how to run in the woods by a deer.

One of his friends was a big carp living in a river, which was saved by him when it jumped on the bank.
He sat astride the carp and enjoyed going up the steep fall of the river.
When it was raining, he spent all day with animals in a cave.
He gave foods to rats, squirrels, foxes, badgers, monkeys, rabbits, bears and so on.
He was very popular among them.
Looking at her son, his mother prayed for God, “May he be a brave samurai!”

Several years had passed, and spring came.
One day, he went on an expedition to the next mountain with animals.
He sat on a big bear, with his hatchet on his shoulder, accompanied by a rat, a squirrel, a monkey, a rabbit, a raccoon, a fox, a boar, and a deer.
They really enjoyed the expedition.

Reaching a cliff, they found a wide river flowing at a great speed below them.
“It is so fast we can’t cross the river.” said Kintaro.
“I’ll push a big tree and make a bridge of it” said the bear, and pushed it in vain.
The boar bumped against the big tree, whose leaves shook a little.
“Ok, I’ll try.” said Kintaro, and stood in front of the tree.
He pushed and pushed it.
To their surprise, the tree leaned and fell down between two cliffs with a big noise.
Everyone jumped with joy.
Then somebody spoke to them from behind.
“What a powerful boy you are!”
There were a samurai and his followers standing.
“My name is MINAMOTO-NO-YORIMITSU. Why don’t you be my follower?”
“Can I be a samurai?” asked Kintaro with a surprise.
“I’m sure you’ll be one of my brave followers.” said the samurai.
He returned to the cave where his mother lived and said to her;
“I’ll be one of the brave samurais in Japan like my father.”
Tears of joy ran down her face, though it was sad to part with him.
When he left the mountain, the animals as well as his mother saw him off with sorrowful faces.
“Thank you for your friendship. I’ll never forget you. I love you,Mom. I am sure I will return home in the future.” said Kintaro, waving his hands again and again.
A few years later he became an excellent samurai named ‘SAKATA-NO-KINTOKI’.
In the Capital, he was chosen one of the famous four trusted followers of his master and got rid of ogres living in the mountain called ‘Mt. O-O-E.’
He invited his mother in the Capital and lived together happily ever after.