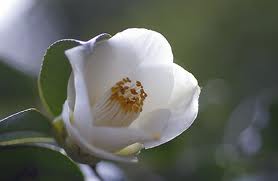 Long,long ago, a painter and a merchant were having a rest under a big tree in the field.
They made friends with each other and told their story each other.
The merchant failed in his business and had only a little money then. The painter began to sleep hearing his story.
Just then a strange thing happened;
A horsefly came out of the nose of the painter who was sleeping and it flew away, but after a while it came back into his nose.
The painter, who awoke, said that he had dreamed a strange dream.
The dream was;
A very rich man lives in the distant place which the painter doesn’t know.
White camellia blossoms are in his garden.
As a horsefly flies around under them, the painter digs to find a jar filled with gold.
The merchant was very interested in his dream and bought his dream for small money.
He started to look for the rich man’s house.
Walking on miles and miles, at last he found the same house as was told by the painter.
He decided to work there.
Spring came, but the flowers of camellias were all red.
He was disappointed, but he waited for the next spring.
It came.
He found a white flower among the red flowers.
He dug under it.
At last he found a jar filled with gold.
The dream came true.
The merchant became very rich and thanked the dream he had bought.