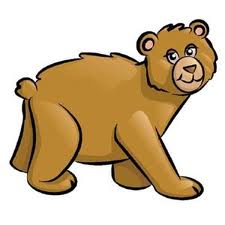 One day in winter, a bear met a fox who came sneaking along with a string of fish he had stolen.
“Hi,stop a minute! Where did you get those fish?” asked the bear.
“Mr.Bear. I’ve been out of fishing and caught them.”said the fox.
So the bear decided to learn fishing and asked the fox to teach how to fish.
“Oh,it’s quite easy.
You have only to go on the ice and cut a hole and stick your tail down through it and hold it there as long as you can.
You shouldn’t mind if it smarts a little.
That’s the time when the fish bites.
The longer you hold it there, the more fish you’ll get.
Then you can pull your tail quickly.”
The bear did as he was told by the fox.
Though he felt very cold and his tail smarted very much, he kept it down for a long, long time in the hole until at last it was frozen.
Of course he didn’t know what had been happening.
Then he pulled it out with a strong pull and it snapped short off.
That’s why the bear goes about with a stumpy tail to this day.