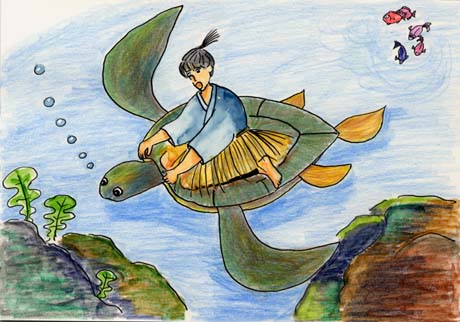 Long, long ago, there lived a kind and romantic fisherman called “Urashima Taro”.
One day, when he took a walk along the beach, he saved a turtle which had been being tormented by the village children.
When several days had passed, he was fishing as usual.
Then the turtle he had saved came to him from the sea.
“Mr. Fisherman. I am the turtle saved by you the other day.
My princess told me to bring you to the Dragon Palace(Ryugujo) to thank you.”
said the turtle.
It took him on the back to the Dragon Palace under the sea.
It was a very wonderful palace where there were much beautiful coral all over the sea and many fish swimming.
What is better, he met a beautiful princess(Otohime).
He had never seen such a beautiful lady before.
“Mr.Urashima, please enjoy yourself here as long as you wish.” said the princess.
He forgot the passing of time.
The life there seemed to him a dream.
After several years he remembered his old village and his old mother.
It was time he had to come home.
Parting with him, the princess gave him a little box as a souvenir.
“Mr. Urashima, this is a magic box called “Tamate-bako”.
When you are in trouble, you can open it.”
When he came home on the turtle back again, he could not find his house and his old mother and he found his village had changed completely.
He was at a loss what to do.
At last he opened the little box out of curiosity.
When he opened it, a white smoke came out of it and he suddenly became an old man with long white beard.
While he was having a happy time under the sea, hundreds of years had passed on the earth.
He was not sure where he was now and whether it was a dream or not.