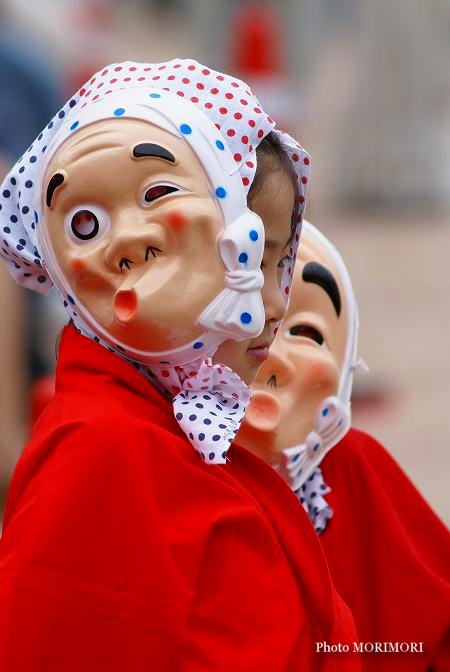 Long long ago, there lived an old man and his old woman in a village.
The old man was kind and hardworking.
He always went to a mountain to gather woods.

The old woman was greedy and lazy.
She didn’t like to work and she was always at home.
One day, when he was gathering woods in the mountain, he heard the voice from somewhere.
“Give me woods.”
He went toward the voice and knew it came from a hole in the ground.
Whenever he took woods in front of the hole, they were absorbed into it.
The moment he looked into it, he himself got absorbed there, too.
Fire was burning there and he was invited to a fire shrine.
He met the God of fire.
The God said to him,
“Thank you for your woods. I’ll give you this bundle in return for woods.”
Returning his house in safe, he found a little boy with funny face in the bundle.
The greedy old woman was very angry at the present, but the kind old man named the little boy ‘Hi-Otoko(Fire Man)’ and took good care of him.
But the little boy did nothing but sit and touch his navel every day.
Though the old man told him not to touch it, he never stopped until it got swollen very big.
Feeling great sorry for him, though the old woman ignored him, the old man hit him on the navel with his cigar holder.
Then a gold coin came out of it.
He hit once more.
A gold coin came again.
The old greedy woman was much pleased at it.
After that the old man hit him lightly on the navel three times a day.
Though they became very rich soon, the old man went to the mountain to gather woods everyday.
One day while he was working in the mountain, the old greedy woman, having a larger cigar holder, ran after him, saying:
“If I hit you on the navel with this cigar holder, I can get many gold coins.”
The little boy ran and ran away from her and jumped into a burning kitchen stove.
He returned to the country of fire, the place of Fire God.
The old man missed the little boy very much and made his mask and put it on a pillar near the kitchen stove.
We have a custom now that we hang a mask of ‘Hi-Otoko’ near a kitchen stove now.

Sometime the name changed into ‘Hyotoko’