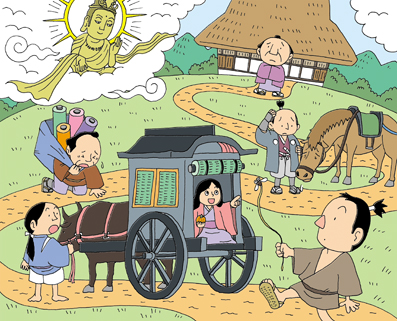 Long long ago, there was an honest but unlucky man living in a village.
He worked and worked from morning till night but he was always poor and unlucky.
One day he prayed to KANNON, or the Goddess of Mercy for his happy future as a last chance, eating and drinking nothing all day.
When it became dark in the evening, the Goddess of Mercy appeared in front of him and said to him,
“You’ll fall down and catch something when you leave this temple. You should go toward west with it.”
On leaving the temple, he fell down and caught something.
It was a straw that he caught then.
Though he thought it was useless, he walked toward west with the straw.

A horsefly flew to him.
He caught and tied it on the top of the straw and walked again.
When he arrived in a town, a crying baby stopped crying at the sight of the horsefly on the top of the straw.
Seeing the joyful baby, he gave it to the baby.
Instead he was given three oranges by his mother.
He walked toward west again with three oranges.
He saw a young lady suffering by the roadside.
As she wanted water, he gave her oranges.
Soon she recovered herself.
Instead he was given a beautiful silk cloth.
He walked toward west again with the beautiful silk cloth.
He met a SAMURAI, or Japanese soldier and his weak horse.
On seeing the beautiful cloth, the Samurai ordered to exchange it with his horse and went toward east with the cloth.
The man looked after the weak horse all night.
The horse got well in the next morning.
He walked toward west again with the horse.
When he arrived in a castle town, a CHOJA, or a millionaire saw the horse and liked it very much.
The man was invited to the Choja’s house, where his daughter brought two cups of tea to them.
To his surprise, it was the young lady that he had given oranges.
The Choja was so moved at the strange meeting and his gentle mind that he decided to make his daughter marry the young man.
The young man became a millionaire from a straw as he was told by the Goddess of Mercy.
He never forgot to take care of even a single straw for the rest of life.
So he was called ‘Warasibe Choja(A straw millionaire)’ by villagers.