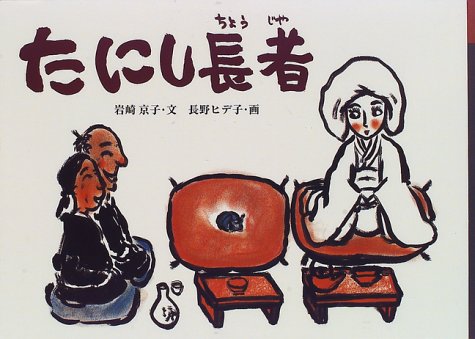 Long long ago there were a farmer and his wife living in a village, who had no child.
They were not so young but they prayed every day to God for their baby.
One day she suddenly started labor and gave birth to a baby.
To their surprise, the baby who was born was a mud-snail.
Even if it was a snail, they loved and took great care of him as he was a beloved son of theirs.
Twenty years had passed.
The farmer and his wife became old, but their child was still a snail.
On the day when they carried NENGU(an annual tribute) on horseback, the snail spoke to them for the first time;
“I’ll make you happy from today.”
The snail took the horse with NENGU by himself to a CHOJA’s(a millionaire) house.
As the snail was now very famous in the village and had much knowledge, he was treated by the millionaire kindly.
The Choja liked him very much and decided to make him a son-in-law.
The millionaire had two daughters.
An elder sister rejected to marry him firmly, while a gentle-minded and hardworking younger sister accepted to marry him as it was his father’s decision.
Anyway they got married and were having happy lives.
One day they went to see a Festival of the village fair.
On their way back to the house, she put him on the edge of a rice field and went to a KANNON(Goddess of Mercy) statue to pray for their happiness.
Then the envious elder sister asked a crow to attack the snail.
He ran away from the crow as fast as possible to the house.
She noticed it and helped him by covering him with her body, when the snail grew and grew big until it was a handsome young man.
Her love for her husband caused a miracle.
He succeeded to his father-in-law’s wealth and he was called ‘TANISHI(mud-snail) CHOJA.’