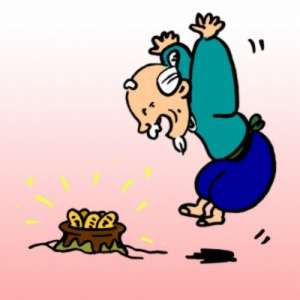 Long long ago, there lived a good-hearted old man and his wife in a village.
On the other hand, a lazy old man lived next to their house.
One night the good old man had a good dream and told it to his wife in the morning.
“I had a good dream. I was given a gift from heaven.”
“That’s a good dream, isn’t it?”
Both of them smiled together.
On the day they went to their small field to plow land, when he heard the sound in the earth at the tip of his hoe.
He dug carefully and found a small pot.
“What is this? Old Ma.”
“What are there in the pot? Old Pa.”
He opened it, to their surprise, found many O-bans(large sized golden money used in Edo Period) and Ko-bans(small sized golden money) in it.
They were so surprised that they couldn’t speak and move for a while.
Just then the lazy old man was watching them from behind a tree.
“What? Money in a pot?” said the lazy man to himself.
“Is this a gift from heaven you were given in the dream?” asked the old woman.
“No, I was given a gift from heaven. This came from earth. So this is a gift not from heaven but from earth.”
“So we’ll return it into the earth. Old Pa.”
They buried the pot again in the field.
“They are foolish. That is mine.” said the lazy old man.
In that night he returned to the field with a hoe carrying on his shoulder.
He dug it out and opened it.
But many snakes came out of it one after another.
He quickly covered the pot and ran with it toward the village to the house of the good old man’s, saying,
“They told a lie. I’ll revenge them.”
He climbed the roof and looked inside the house from a hole for putting out smoke.
The old couple were drinking tea by the hearth.
“They tricked me. I’ll give you snakes.” And he opened the cover of the pot and dropped the snakes, which quickly changed into money when they fell down. Many O-bans and Ko-bans poured from heaven over the old couple.
“This is a gift from heaven I was given in a dream.”
They jumped for joy with hand in hand.