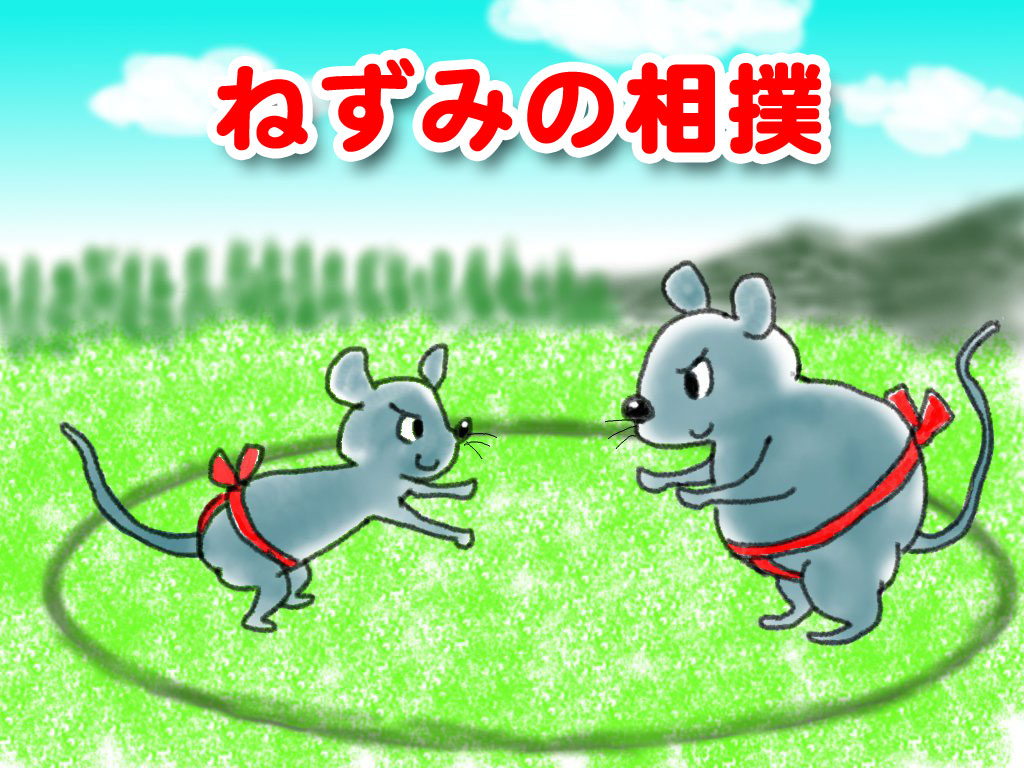 Long long ago there lived an old man and his wife in a mountain.
As they were poor, they seldom went shopping in a town and they had a bath once a month.
The old man worked in his small field, while his wife did needlework at home.
One day, when he went to the mountain to gather woods, he heard some noise and peeped there between trees.
There were two rats practicing Sumo wrestling there.
A big rat was always throwing a small one down out of the ring.
Watching the small rat, he noticed it was the very rat that lived in his house.
When he came home, he talked to his wife about what he saw today.
“What? Were rats wrestling?” said the old woman.
“Mom, The strong big rat was one of the Choja’s(millionaire). The weak small rat was mine.”
“Dad, I feel sorry for him. Let’s make rice-cakes and give him.”
“That’s a good idea.”
She washed glutinous rice for Shogatu(the first days of a new year), steamed it, put it into a mortar.
He pounded steamed rice, while she turned it quickly with her hands.
After that, she tore it into several pieces and carried on a tray to a cabinet.
“My small rat. Eat as much as you like, and you’ll have enough power to defeat the big rat.”
On that night, the small rat found the rice cakes in the cabinet and ate them.
“They are delicious. I have never eaten such a delicious meal before.” said the rat, eating and eating one rice cake after another until the last one.
On the next day, the old man went watching the Sumo match between the big rat and the small rat in the mountain.
On the first match, the big rat pushed the small one out of the ring.
On the second match, the small rat threw the big one down in the ring.
On the third match, the big rat hung the small one out of the ring.
On the fourth match, the small rat pushed the big one out of the ring.
Seeing the matches, the old man was satisfied to smile.
They wrestled so many times that they got tired and sat down under a tree.
“What made you so strong within a day?” asked the big rat.
“I ate rice cakes made by my kind old master and his wife.” said the small one.
“I’d like to eat that rice cake, too. May I come to your house?” said the big one.
“My master is very poor. If you bring money, you can eat it.”
The old wife asked his husband on his coming home.
“How about the result of today’s Sumo wrestling?” asked the wife.
“It was a good match. My small rat was as strong as the big rat.”
“I am glad to have been of good help to him by making rice cakes.”
“Well, I heard the big rat also would like to eat our rice cakes,” said the old man.
“So why don’t we make rice cakes for them today, too?”
“We can’t eat a rice cake in a new year, but we don’t care.”
On that night, the big rat visited the house with a big bag on his shoulder.
“These are rice cakes made by my kind old man and old wife. Why don’t you eat?”
“This is delicious. I have never eaten such a delicious rice cake before.”
The two rats ate and ate rice cakes until they could not eat any more.
The old woman was kind enough to make each of them a red loincloth for Sumo wrestling.
In the morning they found a bag full of money in the cabinet.
They had a happy new year and went shopping in a town and had a bath every day.