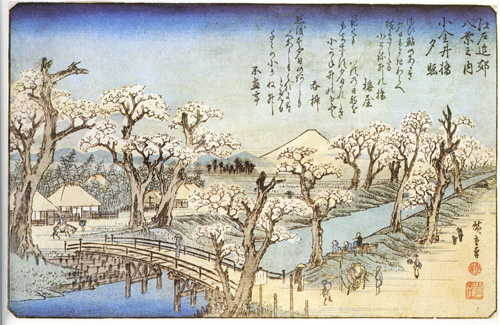 Long long ago, there lived an honest young man called ‘Choji’ in a mountain.
He earned his living by making charcoal.
One night he had a strange dream, in which a strange old man appeared and said to him,
“Choji, Go to the town and stand on a bridge called “Takara Bashi’(Treasure Bridge), and you’ll be lucky.”
In the morning, he decided to go there.
He carried a big straw bag full of charcoal for sale on his back and hurried to the town.
He found the bridge and stood there.
“I wonder what kind of happiness will come to me?”
He was standing there all day, but nothing happened to him.
On the second, third and fourth day he was also standing all day, but nothing happened to him.
On the evening of the fifth day, the master of a Tofu(Soy bean curd) shop near the bridge came to him,
“Why are you standing here for five days?” asked the master.
“I am standing here as I was told to do in a dream.” said Choji.
The master, hearing it, laughed at him and said,
“It’s nonsense! I never believe dreams, but I also had a dream last night.
A strange old man appeared in the dream and said, There lived a young man called ‘Choji’ in a mountain.
Dig the ground at the foot of a Pine tree near his house, and you’ll be happy.
I don’t know the man called ‘Choji’, so I never believe such a dream.”
He was so surprised to hear his name called but he pretended to be calm.
As soon as he got to his house, he dug at the foot of the pine tree and found much treasure.
After that he was called “Choja”(millionaire), not ‘Choji.’