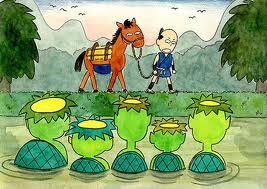 Long long ago, there lived a father and three daughters in a village.
He was rich enough to have many rice paddies around his house.
One year they had little rain for a few months.
The land was so dry that he couldn’t grow rice.
“I would like someone to fill paddies with water. If he should do so, I’ll give my daughter to him.”
When he said to himself on the dry paddy, a Kappa(Japanese imaginary mischievous river-sprite) appeared in front of him.
“I’ll take the job and fill paddies with water. Do you promise to give your daughter to me?”
“Sure! If you can, I’ll give you my daughter. I promise you.”said he, smiling.
On the next day, he was much surprised to see the paddies filled with much water.
Though he was delighted with it, he remembered his promise.
“Oh, my God! What shall I do? But promise is promise.”
When he came home, he asked his eldest daughter to marry Kappa.
“I promised Kappa. Would you marry him?”
“What do you say? Of course, not. You are crazy.” She got so angry.
He asked his second daughter to marry Kappa.
“I promised Kappa. Would you marry him?”
“Why do you ask me like that? Of course, not. I hate you.” She got so angry, too.
He asked his youngest daughter to marry Kappa.
“I promised Kappa Would you marry him?”
“Well, I don’t want to marry Kappa, but you promised him. We must not break promise. I’ll marry him if you wish.” said she sorrowfully.
“Thanks. You are the kindest daughter in the world. I’ll present you what you want for your marriage. What do you want?”
“Well, I want a hundred Hyotans(bottle gourd) for my marriage.”
The father collected a hundred bottle gourds for her in his neighborhood.
On the next morning, a handsome young man visited him.
“I came to meet your daughter.” said he.
“My father, I’ll go with him.” said the youngest daughter, carrying a big Furoshiki(Japanese wrapping cloth) full of a hundred bottle gourds on her back.
“Is he a real Kappa?”, the two sisters envied the youngest sister.
She followed him near a lake.
“My house is, as you know, under the lake. Let’s go.” said he, pulling her by the hand.
“Mr.Kappa, Please wait a minute. I have a favor of you. These bottle gourds are very important for my marriage to you. First of all, would you take these gourds to your house?”
“It’s a piece of cake.” said he.
He scattered them on the lake and he also jumped into the lake.
He tried and tried in vain to sink the gourds, which were so light that they floated on the lake at once.
It was a hard task for him to take her marriage utensils to his house.
In the meanwhile he changed into a figure of Kappa.
“I can’t do that. I’ll give up a human bride. It’s better to marry a daughter of Kappa.”
He disappeared under the lake, saying so.
The father was very glad of her returning safely to his house and said to her.
“You are only the heiress of me.”
The two elder sisters apologized to her father, but it was late.