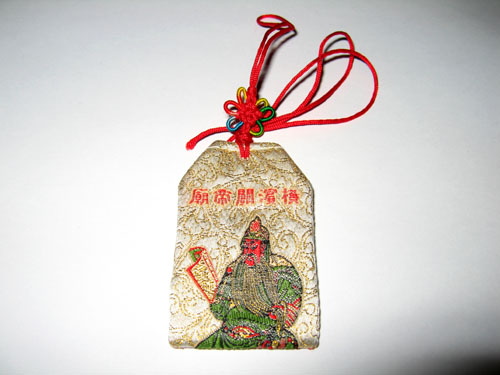 Long long ago, there lived a young merchant working for a small kimono shop in a town.
He had a dream of going to Kyoto someday to be successful.
One day his best friend suggested that we should go there to work for a big kimono shop.
He decided to go to Kyoto with him so that he could make his dream come true.
By the way he had a young wife who was impregnated and talked to her about it.
“My Wife, I love you so much but I’m determined to be in Kyoto for a while until I am successful.
Please wait for me at home and bring up our baby.”
“I’d like to be with you anytime.
But I am pregnant now. I can’t go with you.
I’ll wait for your safe return here.
Do come home when cherry trees blossom in spring three years later.”
said she to her husband, weeping.
Leaving home, he gave her his favorite flute, while he got an amulet of a shrine from his beloved wife.
In Kyoto they came across a beautiful lady.
The young man was so charmed by her mysterious beauty that he couldn’t move for a few minutes.
Coming to his sense, he hurried to the kimono shop with his friend.
On their way there, they ran across a strange monk, who said to them.
“Young men, never trust anybody you don’t know.”
They succeeded in meeting the master and got permission to work for him.
On a rainy day the young man found the beautiful lady wet with rain on a street.
He ran to her to hand his umbrella.

“Young Lady. You would get a cold without an umbrella. Why don’t you use my umbrella?”
“It’s so nice of you. If you come to my house tomorrow, I can give it back.” said she, showing her residence.
On the next night after his work, he visited her house, where he got kind hospitality from her and had a wonderful time, eating and drinking.
In leaving the house, he was given a beautiful golden sword by her as a souvenir.
On his way home, he ran across the strange monk again, who said to him.
“Young man, never miss the amulet you were given by your wife.”
One day the master found the young man having the beautiful golden sword.
“Show me your sword.” said the lord, looking at it.
“Oh, my God! This is one of my swords stolen a month ago. Why do you have it? Didn’t you steal it?”
“No. I was given it by a beautiful lady. I never stole it from you.” explained he desperately.
“Please believe me. If you come to the house and meet the lady, you will understand what I am saying is true.”
The master and the young men hurried to the house and entered without permission.
There was the lady sitting in a room, surrounded by many swords.
“Young lady, Why do you have so many swords in this room? You stole my sword, too. I’ll catch you.” said the lord to her.
Then she transformed into a frightening snake-monster and attacked the lord to death.
Watching it, the young man lost his consciousness.
Coming back to life, he found himself lying by the monk in a field, who said to him.
“The amulet you have saved your life from the power of evil. Don’t wish too much. Don’t look at distance. There is no happiness here.”
Hearing this, he decided to return to his hometown with his best friend, where his wife and their child were waiting for him.
But seven years had already passed since he left there.
On their way back to their hometown, they met a poor samurai, who came to them and asked them for money.
Rejected his request, the samurai suddenly attacked them and cut his best friend with his sword to death, while he ran away from him and came back to his home alone.
After hesitating for a long time, he knocked on the door of his old house.
His wife opened it, and they were united after seven years’ absence.
Making an apology for his foolishness, he handed her a beautiful Kimono he had bought in Kyoto and they spent the night together.
The next morning he woke up to find himself lying near a tomb under a cherry tree, which was having the Kimono he had handed her the night before on one of the branches.
The moment he saw it, he understood everything.
She was no more alive.
His old mother approached him with his seven-year-old girl who looked very alike his lost wife.
He hugged his mother and his daughter tightly.
He heard the sound of flute far away.