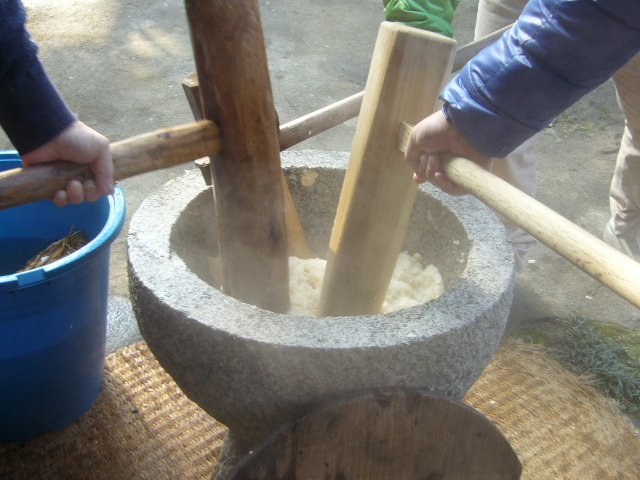 Long long ago, there lived a Buddhist priest and his young disciple in a mountain temple.
The priest was so mean that he never gave the young boy sweets he had been given by the supporters of his temple.
One evening the priest was baking ‘Mochi’(rice cakes) on ‘Hibachi’(brazier) in his room by himself, while the disciple was watching him through a gap between the ‘Fusuma’(framed and papered sliding door as a room partition).

“It’s baked so delicious.” said he, having the hot rice cake.
“Fuu-Fuu.” he blew his breath to cool it down before eating it.
The boy wanted to eat so eagerly.
After thinking for a while he had a good idea.
On the next evening he said to the priest,
“Mr. Priest. May I ask a favor of you? Do please call me ‘Fuu-Fuu’ from today.”
Though the priest thought it a little strange, he wanted to eat ‘Mochi’ as soon as possible.
“Ok, I’ll call you ‘Fuu-Fuu’ from now.
It’s time you went to bed.” said he, preparing for it in his room.

“It’s baked so delicious.” said he, having the hot rice cake.
“Fuu-Fuu.” he blew his breath to cool it down before eating it.

Then the young boy opened the sliding door and entered the room.

“Yes,sir. What shall I do?” said the boy.
“What’s the matter with you? I didn’t call you.” So surprised, he stood up.
“You called me, saying ‘Fuu-Fuu’.”
The master laughed at him loudly and said to the boy,

“You are so clever. Ha-ha-ha-ha.” said the priest and gave a piece of rice cake to the boy.