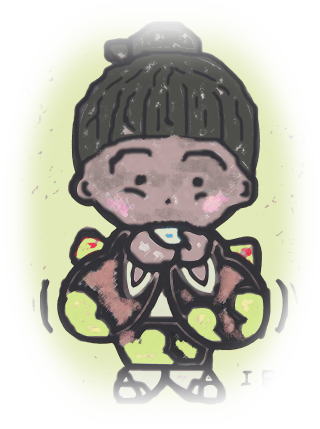 Long long ago, there lived a poor man in a village, who earned his living by selling flowers in his garden, saying
“Flower, flower, beautiful flower.”
However beautiful the flowers might be, he sometimes couldn’t sell all flowers.
On that occasion, he threw them away into the sea, saying,
“Princess of Ryugu(Dragon castle under the sea). I’ll present you beautiful flowers.”
One day when he was standing on the beach, a big turtle came to him.
“Mr. Flower-vendor. I’ll take you to Ryugu. Ride on me.” said the turtle.
“But it is said that in ancient time a young man called ‘Urashima Taro’ went there and spent three days and when he came home, thirty years had passed. I’d like not to be old.” said the man.
“It is an old story. Don’t be nervous. Our princess would like to say ‘Thank you’to you because you gave her many flowers so many times.”
At last he agreed to go to Ryugu, where many water animals such as bream, flatfish, shrimp, octopus, jellyfish and so on were waiting for him at the entrance.
“Welcome to Ryugu.” they said at the same time, introducing him to the Princess.
“Mr. Flower-vendor. I would like to express to you my deepest gratitude for giving me many flowers so many times. I would like to present one boy in return for flowers. Take him with you to your home and take care of him, and you’ll have a lucky life forever.” said the Princess to the man.
He looked at the dirty boy, whose nose was sniveling and whose mouth was watering.
Anyway he came home with the dirty boy on the turtle’s back and named him ‘Toho(AT A LOSS).
‘
“Toho. My house is small. Can you do anything?” said the man to the boy.
“Please close your eyes until I say ‘OK’.” said the boy, clapping his hands three times.
“Ok,”
Opening his eyes, the man found himself sitting in a huge house.
He wanted new goods one after another, like a new carpet, drawers, new clothes and much money.
He got whatever he wanted from the lucky boy.
There was no need for him to work any more.

A few years had passed.
Now he was a millionaire and spent every day playing with young ladies, gambling and drinking.
The trouble was that the dirty boy had always been staying with him and never parted from him.
“Toho. Why don’t you blow your nose?” said the man to the boy.

“No. I never blow my nose.” answered the boy.
“Toho. Why don’t you clean the water of your mouth?”
“No. I never clean the water of my mouth.”
“If so, go back to Ryugu at once. I don’t need you any more.”
“I understand.” said the boy.
As soon as the boy went out of the house, everything changed into what it used to be.
The house, his clothes turned into very old ones as if he had a dream.
He didn’t know what happened.
He was AT A LOSS(Toho).