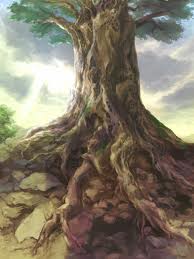 Long long ago, there lived a poor young lady and her old grandmother in a village.
She lost her parents in her childhood.
The young lady worked in the daytime from early in the morning till late in the evening at a Choja’s(Millionaire) house in a town.
She had every supper here, a little of which she took back at home to her grandmother.
On a rainy day on her way home she had a shelter under a huge tree, which whispered to her,
“Young lady. I know you are a very hard worker.
Listen to me, I’ll be cut down in three days by wood-cutters sent by the lord and made into a huge ship in three months and carried to the sea.”
“Oh, I feel great sorry for you.” said the young lady.
“But when they set me into the sea, however many men push me into it, I’ll never move.
Then the lord will give a message to people,
‘If anybody should push the ship into the sea, I’ll give much reward to him.’
You have only to apply for it and stand on the bow of me, saying
‘Move the ship. One, Two, Three.’ I’ll move slowly into the sea.
You’ll be happier by the reward given by the lord.” continued the tree.
The tree was cut down three days later and a huge ship was completed three months later.

The day came when they set the ship into the sea.
Many people went to the sea to see the huge ship float on the sea.
However hard workers pushed it, however, it never moved.
At last the lord gave a message to people as the tree told her.
When she applied for it, everyone laughed at her, saying
“Who can move the ship? Many strong men couldn’t move it, much less a woman.”
“Anyone who moves the ship will do.” said the lord.
While many spectators were watching her, she stood on the bow of the ship and said in a loud voice, “Move the ship. One, Two, Three.”
To their surprise, the ship began to move into the sea little by little until it floated in the sea.
“What a mysterious lady she is!” said everyone including the lord.
“I am never mysterious. I only did as the tree…….” said she quietly.
“I’ll give you reward as I promised. What do you want? Tell me anything you want without reserve.”
“I have a sixty-year-old grandmother at home. We are so poor that we don’t have enough money to buy rice, clothes.”
“Don’t be anxious.” said the lord.
On the next day he ordered his men to carry much rice and clothes to her house.
She had a happy life with her grandmother for the rest of life.