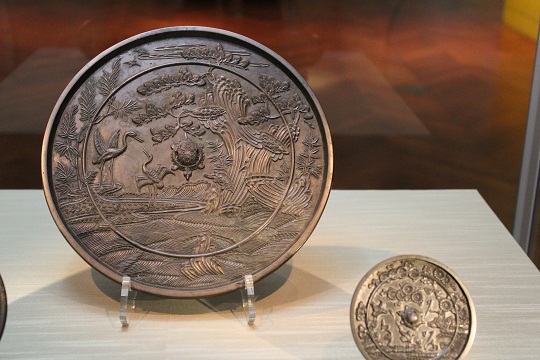 Long long ago, there lived a young samurai(soldier) and his wife in a town.
They had a little daughter.
One year the father went to Edo(Tokyo) to do his duty as a samurai.
The young wife stayed with her daughter in the town and waited for him to come home.

When he came home, he never failed to bring souvenirs for them.
He brought sweet cakes and a pretty doll for his daughter, and a mirror for his beloved wife.

She was very interested in the mirror because she had never seen it.
She saw a face in it, which she didn’t know, a woman’s face, young and beautiful and smiling.
She asked his husband who she was.
He smiled at her and said, “It’s you. It’s your face!”
She loved the mirror because it was a present from her beloved husband and kept it in a drawer for several years.

After some years of happiness, she suddenly became very ill.
She knew she would die.
She called her daughter to her bed and said to her daughter, handing the mirror to her.
“My daughter. Listen to me! I am very ill.
I can’t live any more.
But don’t grieve for my death.
If you look into the mirror, you can always see me.”

After her death, the daughter looked into the mirror every day as she was told by her mother, who was always there in it.

She didn’t know she was looking at her own face.
When she looked into the mirror, she thought she was seeing her mother, as she looked exactly like her mother, young and beautiful.
She talked to her mother every day and loved the mirror better than any thing else.
The father sometimes noticed what his daughter was doing and said to his daughter one day.
“My daughter. Why do you speak to the mirror every day?”
“Because every time I look into it, my mother is in it.
She is always young and pretty and smiling at me.
I am encouraged by my mother in the mirror, though she never speaks to me.” she answered.
Listening to her, the father couldn’t say anything but tears spilled over and ran down his face.