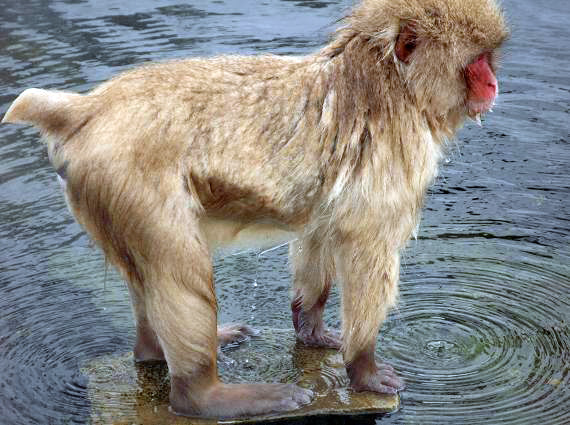 Long long ago, in a rainy night an old man and his old wife were talking by the hearth in a room.
“Old Dad, What a lonely night it is! What shall we do if a bear comes?”
“No need to worry. A bear dislikes fire, so it will never come in. I am much more afraid of ‘Amanmori’ than a bear.”
A bear was overhearing them outside the house.
“Amanmori? What is it? Is it more fearful than I? What shall I do if I was caught by it?” The bear walked away quietly.
By the way, do you know Amanmori?
As you know, it means leaking from a roof or a ceiling.
When the bear was walking to the forest, he saw someone coming nearer to him.
“Oh, Amanmori are coming to me.” thought he, and he hid himself into a horse-house in a hurry.
A thief came to steal a horse from the horse-house and took the bear for a horse and rode on the bear, who thought Amanmori rode on him and was so surprised that he began to run as fast as possible with the thief on his back.
The bear tried in vain to swing it downward.
“Be calm, Good horse. Be calm.” said the thief, clinging to the bear very hard.
At last the bear succeeded in swinging him downward until the thief fell into a hole.
“I got rid of Amanmori. I’m very happy that my life was saved.”
A monkey with a long tail was watching the bear and said to him,
“Mr. Bear. What’s the matter with you?”
“I was caught by Amanmori and I was running about all night to swing it downward until at last I threw it away into this hole.”
“Mr. Bear. What is Amanmori? I’ve never heard of it.”
“Don’t you know? It is a very, very fearful animal.
An old man and his old wife were talking that they were not afraid of me but afraid of Amanmori.
That rode on my back.
I thought I would be eaten by it.”
“Let me see. Mr. Bear. What kind of animal is Amanmori?”
“It has two arms, two legs and it can rise to the feet and walk.”
“Oh, I see. That must be a human being. Anyway I’ll investigate the hole.”

The monkey looked into the hole and found something move.
“Is there anyone in the hole? I’ll help you.
Why don’t you hold my tail?”
said the monkey, putting his tail into the hole.
The thief grasped the tail and jumped up out of the hole.
Then the tail was cut off.
“Auch! It’s Amanmori. It ate my tail. It’s very dangerous.”
They say that a monkey has a short tail after that.