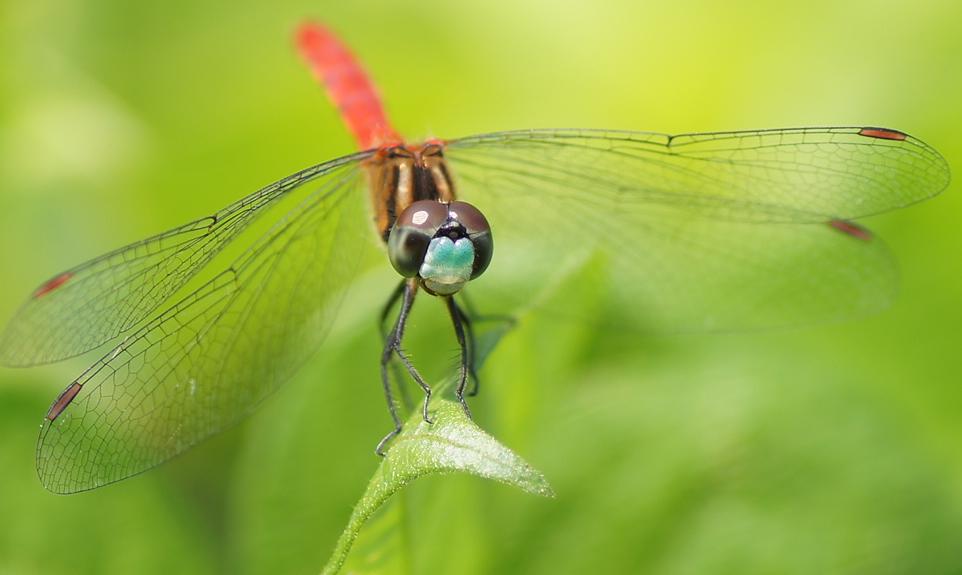 Long long ago, there was a farmer working in a field of a mountain.
After working for a few hours, he sat on a stump to take a rest.
Then he saw something moving in a bush.
It was a dragonfly caught in a spider’s web, which was struggling to escape.
“Oh my God, I’ll help you at once.” he said to himself and helped her from the web.
The dragonfly flew away somewhere.
Soon he felt asleep and slept on the grass.
He had a dream that he was given Sake by a dragonfly.
“Wake up, or you’ll catch a cold.” said his wife who came to find him.
“I had a wonderful dream.” explained the farmer to his wife, when nice scent of Sake streamed to them from somewhere.

They went toward the scent and, to their surprise, found a golden spring of Sake under a big rock.
“I’m sure the dragonfly taught me in the dream.” cried the farmer with joy.
He put Sake in a bottle made of a bamboo.
On their way home, he went down to the stream to wash his feet, when he found something flashing in it.
“Wow, It’s gold-dust.” cried he with surprise and called his wife.
They scooped it up with Zaru(Japanese colander made of bamboo).
No matter how many times they might do, it was never lost.
He bought dozens of barrels for the gold-dust and filled them with Sake in the spring to sell in a town.
Soon they became rich, but they thought something lacking. V
It was their child.
“Ms. Dragonfly. Please endow us with a child.” prayed the farmer in his mind.
One evening there was a knock on the door.
“Who is it?” said his wife and opened it to find a pretty girl standing there.
“I lost a way and I was at a loss where to go. I have no home to return. A dragonfly brought me here.” said the girl.
“It’s a miracle. The dragonfly must have granted us our wish.” said the farmer.
The girl came to live in his house as their daughter.
One night several days later, when the father went out to get firewood for the fireplace, he found a few thieves stealing the gold-dust in the river.
“What, what shall I do?” he said to his wife and daughter after rushing back home.
“Don’t be so worried. A good idea hit on me.” said the daughter and went to the stream with a big rice pot full of rice.
On washing the rice with the water of the stream, it became so white that the thieves could see nothing in it.
“We can’t see anything here. I know where the Sake spring is. Let’s go to scoop it up.” said the leader of them and stole barrels and climbed up the mountain.
“What shall we do?” said the father pale with fear.
“Don’t be so worried. A good idea hit on me.” said the daughter and took a shortcut to the mountain with a pot full of oil, which she sprinkled around the spring in advance.
Soon the thieves arrived at the spring and said,
“What wonderful scent! A mere thought of Sake makes my mouth water.”
Coming near the spring, they slipped down in a valley.
“I thank you very much from the bottom of my heart.” said the father to his daughter.
“You’re welcome. It’s the duty of child to help one’s parents.”
They worked and worked to be called, “Dragonfly millionaire”.