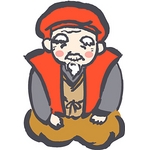 Long long ago, there lived an honest old man in a village, who visited a shrine to pray everyday.
“Mr. God. I am so poor that I can’t offer anything for you. Please forgive me.”
One day, when he was praying in front of the shrine, to his surprise, a god appeared and said to him,
“I was moved to your daily visit. I’ll give you this red hood. If you put it on,
you’ll understand what birds say.” He was really given a red hood.
On his way home, he tried it on.
There were two birds singing on a branch of a tree.
To his surprise, he understood them.
“How foolish human beings are! No matter how much medicine the daughter of Choja’s(millionaire) takes, she won’t be better.” said one bird.
“You are right. They don’t know a snake was confined to the attic when they built his house.” said the other.
“I see, I see.” said he and went to the Choja’s.
“I am a fortuneteller. A snake is confined to the attic. If you release it, your daughter will be better soon.”
Though the Choja thought it was kidding, he called carpenters and examined the attic.
To their surprise, they found a big snake nailed against a pillar.
A carpenter pulled the nail and set it free.
What a miracle!
The daughter who had been sick in bed for many days suddenly got so well that she got out of her bed.
“I thank you very much from the bottom of my heart.” said the Choja to the old man and gave much money to him.
The old man shared the money with villagers and offered his money for the God.