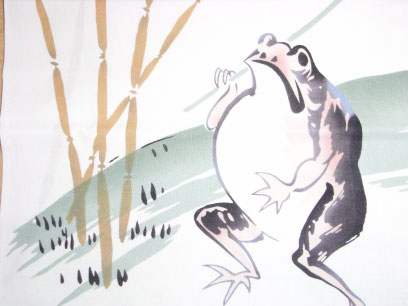 Long long ago, there lived a young man in a village, who wanted to marry in the near future.
He was always saying like this;
“I want to marry a woman who is cheerful and hardworking.”
At last he succeeded in getting married to a woman with the introduction of his neighbor.
The bride was smiling and cheerful all the time, and worked hard from morning till evening every day.
He loved her very much and they had had happy days for thirteen years.
One day she said to him,
“There is a memorial service for my dead father tomorrow. Would you mind my attending it?”
“Of course, not. You never left my house after you came here. You can stay with your parents’ house for a few days.”
saying so, he wondered.

‘Where did she come from?
She has never spoken about her family, parents, childhood and so on.”

On the next morning, she left home and ran toward her old house lightly while her husband ran after her secretly.
“Where is she going to?
There is no house from here but paddy fields.”
said he to himself.

Soon he found himself in the middle of fields, where he heard many frogs croaking here and there.
He saw her stop to turn a somersault and change into a frog and enter the field .
So surprised was he that he sat down the bank of a field.
He picked a stone up and threw it toward the field.
It became quiet in a moment.
He ran to his house like a rabbit.
In the evening she also came home.
“Did they finish the service successful?”
asked the husband to his wife.

“The terrible thing happened during the service.
A stone was dropped from the sky and it hit the priest on the head to injure him.
The service was called off.”
answered she.

“It was I who threw the stone.”
said he, looking her into the face.
“Was it so?” said she sadly.
On saying so, she somersaulted herself to be a frog and hopped away from him forever.