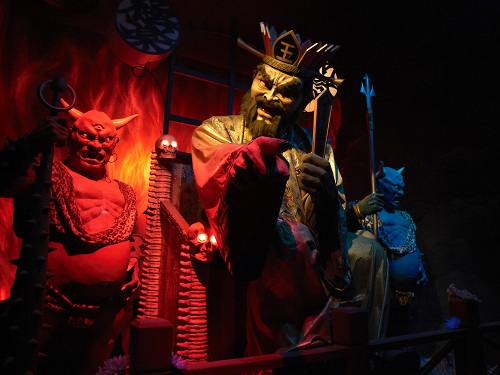 Long long ago, there was a wonderful actor who was very popular among people.
When he was playing in a theater, he was called ” A greatest actor in Japan” and thrown much money on the stage by many audiences.
His name was known not only on earth but also even in Hell.
But one day he became ill to death.
He was alone walking along the way to the next world.
On the way he came to the place which had two ways, a broad way and a narrow one.
“Which way should I go to?” he said to himself, wishing to go to Gokuraku(the Land of Happiness). Then he found a Zizo(a guardian deity of children) standing at the side of the road.
“Mr. Zizo. Please teach me which way to go so that I can reach Gokuraku.”
But it did nothing only smile.
He thought for a while.
“Broad way is for many people to walk along. So it is better to walk along the broad one.”
To his disappointment he got to the entrance of Hell.
“Alas. It means there are more bad people than good people.”
When he was trying to turn back, he was called by a loud voice.
“Welcome to Hell”.
He saw Emma, who was gorgeously dressed, sitting up at the counter of Hell’s entrance.
So afraid, he fell flat on the ground.
“You earned money by moving your arms and legs, by cheating people.
So you must go to Hell.” said Emma, glaring at him, who was too scared to move.
Then Emma said to him in a gentle voice beckoning him, “Come close to me.”
He went to him timidly.
“I have never watched a real play before.
I would like you to play here in front of me.
If you can do successfully, I’ll send you to Gokuraku,”
He was so pleased that he agreed to Emma.
“Do quickly.” ordered Emma to him.
“Mr. Emma. It’s a piece of cake, but I can’t play here on such a low place.” said he.
“What do you want?” asked Emma.
“I want to play on a high place as you are sitting now.” said he.
“So come here and play.” said Emma.
“But I can’t play in white clothes like this.” said he.

“What do you want?” asked Emma.
“I want to play in gorgeous clothes as you wear now.” said he.
“So use my clothes.” said Emma, taking off his clothes.
Emma and he changed their clothes and their place.
He, in gorgeous clothes, played successfully on a high place while Emma in white clothes watched the play on the low place.
Emma said to him, trembling himself.
“You are a wonderful player. But I’m so cold in these thin white clothes. Do quickly.”
He played in a loud voice beautifully moving his arms and his legs.
“You are the best player in Japan.” cried Emma, beside himself with joy.
Soon he drew Emma’s sword and cried,
“Red Demon and Blue Demon, come here.
This is a man who earned money by moving his arms and legs, by cheating people.
Take him to Hell.”
Demons rushed Emma and pinned him to the ground.
“Be quiet. Don’t move.” said demons.
“What do you do? I’m the Great King of Emma.” cried Emma.
“You are an outrageous man to use my name. Take him quickly to Hell.” said the actor.
“It’s me. It’s me. Did you forget my voice? I’m the Great King of Em… .”said Emma.
“You are a wonderful player.
You can speak in an exactly same voice that Emma does.”
said Demons and threw him into a huge burning pot in Hell.
He succeeded to take the place of Emma.
Now all of his villagers could go to Gokuraku by his judgment.