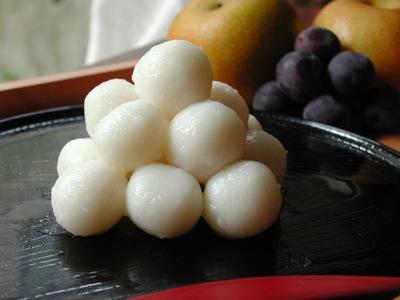 Long long ago, there lived a dull fellow in a village.
One day he visited the house where his wife had been born and lived for a Buddhist ceremony in a distant village and he was treated Dango, or dumpling for the first time in his life.
He said to his mother-in-law.
“What do you call this cake?”
“We call it ‘Dango’”, she answered.
On his way home, he repeated the name again and again lest he should forget it.
“Dango, Dango, Dango ….”
When he had to jump over the ditch on the way, he said “Dokkoisyo.”
Now he said “Dokkoisyo”, he repeated it instead of “Dangog” until he got to his house.
“Dokkoisyo,Dokkoisyo,Dokkoisyo…”
As soon as he entered the front door, he said to his wife,
“Today I had a delicious cake called ‘Dokkoisyo”. So please cook it for me.”
“I have never heard of it. I don’t know how to cook it.” she said.
“Why don’t you know? I ate it at your parents’ house.”
At last the quarrel led to a hard battle.
She was much stronger than he and she hit him hard on the head.
“Oh my God, you had a bump like Dango.” she cried.
“Oh, that’s it. It’s ‘Dango’. Please make it for me.”
“Oh, it’s a piece of cake.”
She cooked a few Dangos for her husband.
Everything finished happily.