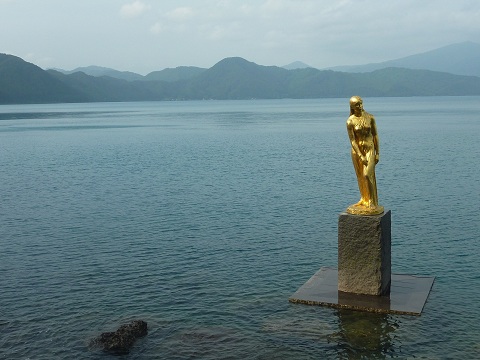 Long long ago, there lived an old man and his old wife in a mountainous village.
One day they found a baby near a lake and raised her like their own daughter as they had no child.
She grew up to be a beautiful lady in eighteen years.
The brothers who lost their parents, living near her house, had liked her since they were children.
The elder brother was handsome and active while the younger one was kind but a little slow.
One day when the lord visited her village, he saw her dancing in a village festival and liked her.
She was ordered to marry him as one of his wives.
The villagers were pleased at the marriage because it meant the prosperity of the village, but as she liked the elder brother, she escaped from them into the mountain.
At last she jumped into a lake as she was driven at the edge of the cliff.
Then a Dragon appeared on the lake.
The villagers believed she became the dragon.
But the Dragon was her father, “Ryu-Oo”, the king of The Dragon.

One year the village had a long drought.
The rice fields were completely dry and even the lake was almost dry.
The villagers were ordered to make fields in the dry lake by the lord.
But they had strange dreams at the same night, in which the lady appeared and asked them,
“Help the lake. It is not only for people but also for all animals. Keep the lake as they are.”
But they never listened to her and continued to make fields there.
At last the Dragon King got angry and caused a big flood to make everything wash away.
The brothers were dead in the lake.
The lady asked her father.
“I loved the brothers. Please help them instead of my life. To tell the truth, I have a baby of the elder brother in myself.”
“If you give life to them, you’ll never return to a human being. You are an ugly dragon forever.”
The lady agreed to become a dragon and the elder lived under the lake and the younger returned to his village with the baby between the lady and the elder brother.
Fifteen years had passed since he returned.
The baby grew up to be a lady like her mother.
One day the little brother, or her uncle said to her,looking at the lake.
“Fifteen years ago we were saved by your mother.
Your mother was beautiful like you.
She became a dragon to save our lives; your father and me.
I promised that I would return to her when you became fifteen.
It is the day when I return to the lake.”
He went into the lake never to return.
The lake is called today “Tazawa-Lake.”