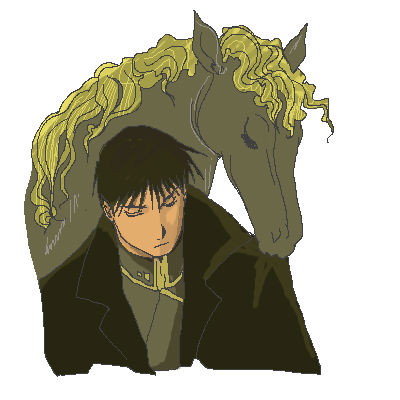 Long long ago, three men were traveling to Ise-Shrine, the biggest shrine in Japan at that time.
After walking and walking from Edo(Now Tokyo) for several days, they reached an unknown town.
They stayed at a small inn there.
They were served strange but delicious ‘Kusa-Mochi’(rice cake including edible grass) for dinner.
When they woke up in the next morning, they found, to their great surprise, themselves three horses.
“Wow, what happened to us?” said one of them in a horse language, blinking his eyes.
The inn keeper came into their room with another man, who was a horse dealer.
“What wonderful horses they are!” said the horse dealer and gave money to the inn keeper.
The three horses were pulled by him to the outside and sold to a rich merchant.
The rich merchant used them to carry heavy luggage and goods to the customers.
“It’s heavy.” “It’s tiring.” “It’s hard.” whispered they, but people never understood them.
Though they were made to work hard in days, all they could eat were the remains of a meal.
One night they heard a few men pass by in front of them, saying,
“Let’s go to watch ‘Joruri’(the narrative Bunraku puppet show).
Today’s story is about a horse.
What is better, the narrator is a famous one.”

One horse said to the others,
“When I was a human being, I loved it.
They say today’s story is about us.
I’d like to go and see it.”

“I’m not interested in it.”
“Nor am I.”
The horse secretly slipped out of the stable with the help of his friend-horses.
He overheard the play behind the stage.

‘There is a pond in the field.
Around the pond are some ‘Susuki’(Japanese pampas grass).
Among them are stripe ones.
When a horse ate the grass, it returned a human being.’
said the narrator.

He was beside himself with a joy and dashed off wildly toward the pond as fast as he could for a few days until he discovered the stripe ones.
On eating it, he was a human being again.
He was much delighted but remembered his friends, who were still horses.
He gathered the grass and returned to them with it.
The two horses succeeded in returning human beings too.

“What shall we do?” said one.
“We’ll revenge ourselves on the inn-keeper who everyday serve strange cakes and makes his customers horses.” said another.
“That’s what we all wish to.” agreed the other.
They secretly entered the room and found the ‘Manju’ on the table.
“This is dangerous. I wonder how many people became horses after eating this cake.”
They carried it to a candy store and had it made into several rice crackers.
They visited the inn again at night and said to the inn keeper.
“This is a souvenir from Ise. Why don’t you try it?”
“Oh, thank you very much. It looks delicious.” said the keeper.”
It tastes good and …..” He was a horse.
“I’m sorry and I’ll never do evil deed like this. Forgive me.” neighed the horse.
But nobody understood him.