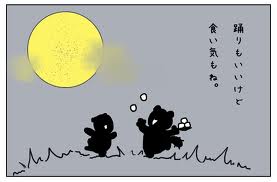 Long long ago, there was a temple called Syojoji in a lonely place a little far from the village.
Trees and bushes grew thickly around the temple.
Foxes and tanuki raccoons showed up even daytime.
The priest in the temple was very fond of music, especially liked playing the shamisen.
He chanted sutras as his work every morning and evening in the main hall of the temple.
After chanting sutras, he used to play the shamisen.
When he was playing, he was entranced by his own music.
So eventually he spent a lot of hours in the main hall keeping playing it.
One day in autumn, he worked as usual and played the shamisen until the bright moon appeared over the mountain.
Then he went to bed.
But he woke up at midnight at some strange sounds.
“What’s going on outside?” saying, he listened to the sounds very carefully and noticed that they were coming closely.
It sounded like a flute-and-drum band.
“That’ll be youngsters in the village who were coming here to have fun,” he said to himself.
He got up and opened a slide door a bit to look out at the ground of the temple.
What he found there were not youngsters he was expected but tens of tanuki raccoons, big and small, beating drums and dancing all over the ground.
The biggest one was leading the others beating a drum, ‘Rub-a-dub! Rub-a dub!’
A couple of them were playing the reed pipe, ‘Peep, peep! Peep, peep!’
Little ones were drumming in concert, ‘Rap, rap! Rap, rap!’
In fact they were beating their own bellies with their forefeet!

Come, come, everybody.
How do you do, and how are you?
Won’t you have some candy,
One and two and three, four, five?
Let’s all sing a happy song.
Sing tra-la la la la.
Won’t you talk and sing with us
Make friends in the world?v
Come come, come
Come come, come
And have dancing tra la la
Good-bye! evrybody.
Good night, until tomorrow.
Monday, Tuesday Wednesday,
Thursday, Friday, Saturday, Sunday.
Let’s all come and meet again.
Singing tra la la.
(From the book of “Come come, English for Everybody”:
Written by Tadaichi Hirakawa: And added 2nd paragraphs by Sadao Mazuka)
The priest, at first, was surprised, soon enhanced with their music.
He thought that might be so called ‘tanuki raccoon music.’
He opened the door, stepped down the ground with his samisen in his hand, and joined the dancing tanukis with playing the samisen.
They all were playing and dancing merrily.
Then he started singing.
His voice became bigger and bigger.
And the tanuki-music also became much bigger.
Then the priest sang at the top of his voice and the tanukis desperately beat their bellies.
The music was going to reach a climax.
Before long day broke, and the tanuki raccoons disappeared somewhere one by one.
The same went on the following night, and one more night.
Then the priest, who was taking a nap to prepare for the night’s festivities, began to wonder why the night was so quiet.
No tanukis came at that night.
He was worried about them.
At dawn, he started searching in every nook and cranny, and then he found something at the back of the main hall.
It was the big tanuki fallen on the ground.
It was already dead for his belly torn open.
Maybe it beat its belly too much.
He felt so sad.
After spending those enjoyable nights with them, he felt as if the tanuki had been his friend.
The carcass of the tanuki raccoon was buried there with respect by the priest.

Syojoji is in Kisarazu, Chiba Prefecture. It was built in Keicho period(1596-1615)
In 1919(8 year of Taisyo) Noguchi Ujo(lyricist) visited the temple and heard the temple’s legend.
It inspired him so much that he made a nursery rhyme.
It was made public in 1924 (13 year of Taisyo) with music composed by Nakayama Shinpei.
‘The Tanuki-Raccoon Song at Shojoji’, has become popular and spread nationwide.