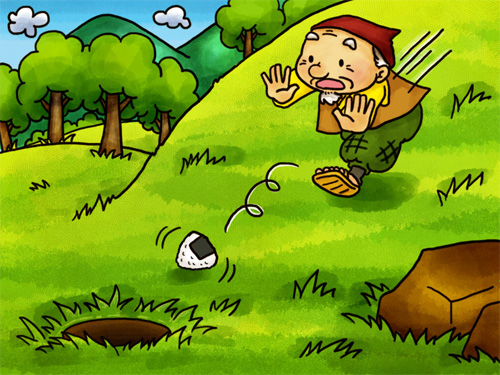 Long long ago, there lived a good old man and his wife in a village.
They were nice and honest, and worked hard, so people called them Good Old Couple.
One day, as usual, the old man went to a hill to gather firewood.
He carried a big rice ball,or an omusubi in Japanese, that his wife made.
After working hard all morning, he felt hungry.
After work was his favorite time to eat a rice ball.
He sat on a stump near by and grabbed the big rice ball to eat.
When he was about to eat, the rice ball slipped out of his hands, and fell down to the ground.
Look! It started rolling down along the slope.
“Wait a bit, wait a bit, my rice ball.
It’s the rice ball my wife made,”
crying, the old man was running after it.

But it kept rolling down so fast that he couldn’t catch it.
Then it fell into a big hole at the end of the slope.
“Oh, I’ve never noticed there’s such a big hole here,” he said.
He looked down into the hole.
Just then a song came out of it.
“Rice ball rolling down.
Rolling, rolling down.”

This time the song he heard was like this.
“Old man rolling down. Rolling, rolling down.”
He looked around.
The place he was sitting was surely the bottom of the hole.
But it looked like a big hall.
And can you believe this?
There were lots of mice working there.
One of white mice came near him, and said,
“Welcome to our place, Old man.
Thank you so much for giving us that big rice ball.
Maybe your wife made it.
We all are glad to have it.
We’ll serve you lunch in return.”

All the mice were working happily.
Singing a song, they were making rice cakes.
(Rice cakes are called mochi, and are essential for happy occasions in Japan.)
Their working song was like this,
“If there’s no cat, our place will be peaceful.
We love peace in the world of mice.
Yo-ho, yo-ho-ho.”

Before long, just-made rice cakes and some food were served in front of him.
The moment he bit a cake, he said,
“This is the most delicious rice cake I’ve ever had in my life.”

And he ate all the food they served.
Then the mouse brought a small but beautiful box.
Handing it to him, the mouse said,
“This is for your wife.
Would you tell her how we liked her rice ball?
We all appreciate it.”

In the meantime his wife had started worrying about her husband who was a little late in returning home.
When he came back with the box, she cried with relief.
Soothing her, the man told her why he couldn’t come home earlier.
And opened the box he brought.
Look!
There were some coins and jewelry in the box.
It must be a mouse-treasure box.
The story doesn’t end at this point.
There lived another old couple next door to the good old couple’s house.
As you can imagine they weren’t nice and honest, and didn’t work hard, either.
They overheard the neighbors’ conversation and wanted to get a box like theirs.
The next morning, the other old man went to the same hill with a big rice ball his wife made.
He looked around for the hole he had heard about.
From the top of the hill to the bottom of the slope, he searched the ground for the hole.
He finally found it at the end of the slope.
“This must be that hole,”
he said to himself.
And he dropped his rice ball into the hole.
Soon that song came out of the hole.
“Rice ball rolling down, rolling, rolling down.”
He chuckled to himself, but he couldn’t hear the last line of the song.
He slipped into the hole.
He hit the bottom of it with a thud.
He looked around and saw a lot of mice singing and making rice cakes.
“I’m sure this must be the place,”
he said to himself.
He listened to the song for a while.
The mice just cast a glance at the old man, and were working busily.
Singing the song, they were making rice cakes.
“If there’s no cat, our place will be peaceful.
We love peace in the world of mice.
Yo-ho, yo-ho-ho.”

It occurred to him that he could get mice-treasure if he pretended to be a cat.
He took a deep breath, and said,
“Meow, meow.”
Suddenly the atmosphere changed.
All the mice froze like fossils for a moment.
The next moment one of them shouted,
“A cat! A cat’s coming in!”
Another mouse ordered,
“Don’t let him in. Close the entrance.”
All the mice started moving quickly.
The place was getting chaotic.
Soon it became dark and quiet.
The old man was left alone and completely stunned in the darkness.
He couldn’t think of what he had to do next.
The fear of death, however, brought him back.
He started to dig and dig up desperately with his bare hands to escape from the world of mice.
His wife was too old to walk without a stick, but her expectation for a mouse-treasure box was too big to wait for him at home.
With her stick in her hand, she started walking to the hill.
When she reached the foot of the hill, she became so tired that she couldn’t keep walking.
Against her will, she stopped there for a while.
Then she noticed that a part of the ground in front of her was swelling and moving.
“That must be the mole that damages our field.
I hate it.
I’ll teach it a good lesson,”
she said.

She began to beat the spot with her stick with all her strength.
“Stop it, please. Ouch! Ouch!” crying, her husband jumped up from the mud.
The poor old woman was paralyzed with shock to see that the bad old man appeared covered with mud.
What was worse was that he’d got some bumps on his head.
They both couldn’t say anything for a while.