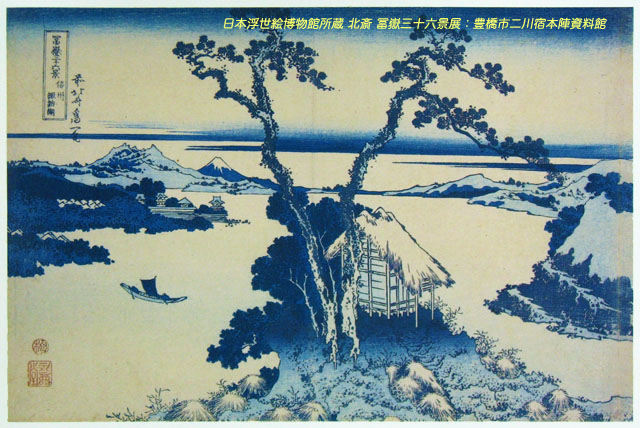 They say one of the most famous shrines in Japan must be Ise Shrine located in the city of Ise in Mie Prefecture.
It has been a traditional custom to visit the shrine and pray for their happiness, especially in the Edo era many people visited there.
This is one of the old stories about a visit to Ise Shrine.

Long long ago, there was a young couple who had once visited Ise Shrine all the way from their village in Akita.
The man was called Matsukichi (Pine-man), and his wife, Matsu (Pine-lady).
They were an extremely handsome couple and looked honest.
They’d saved money for visiting the shrine, and their long cherished dream finally had come true.
On their way back, the woman claimed she was too tired to sleep outdoors.
Although they didn’t have enough money to stay at an inn, they knocked on the door of an inn nearby.

The man showed a pair of Nusa (Nusa is the sacred cloth given to the visitors at Ise Shrine) and his drawstring money pouch, and said to the innkeeper,
“We just visited Ise Shrine.
As you see, we got the Nusa at the shrine.
We’d saved money for this trip, but we spent many days and much money.
Now we are penniless.
My wife says she is very tired and she can’t sleep outdoors tonight.
Would you do us a favor?
I know this is an unreasonable demand, but would you give us a stay somewhere in this inn tonight?”

The inn-keeper looked at them for a while, and then said,
“I believe that no people who visit Ise Shrine are dishonest.
Will you come visit again next year?
All right, I can wait for your bill by then.”

About the same time as the previous year when the young couple had visited Ise Shrine, a group of people stayed at the same inn.
The innkeeper entered their names in the visitors’ book of the inn, and he noticed they came from the young couple’s village.
He looked around but he couldn’t find the couple. He asked the visitors,
“Aren’t there Matsukichi and Matsu in your party?
I think they were from the same village as you are.
They stayed here last year but they didn’t have money to pay.
They promised to pay it at their next visit.”

The people looked one another in perplexity.
No one knew them at all.
The innkeeper added,
“They looked honest, and the wife seemed weak.
I didn’t want to be merciless to the Ise Shrine visitors.
So I told them I could wait for their bill at their next visit.”
When the Ise Shrine visitors returned home, that story was spread among all the villagers.
Although no one knew of the couple whose names were Matsukichi and Matsu, a man said, clapping his hands,

“The two must be the pine trees. I’ve been wondering about the pine trees standing in the precinct of Suwa Shrine (a branch shrine of Ise Shrine).
Didn’t you notice the piece of cloth on the top of each tree?”
“Yes, I saw them.
That must have been the work of strong wind,”
said another man,
“and they must have been blown and caught on the trees from somewhere.”

“Please look at the cloth carefully,”
the first man said,
“You got Nusa when you went to the shrine, didn’t you?
Those two pieces of cloth on the trees are Nusa, I believe.
It sounds incredible, but the two pine trees must have visited the Shrine.”

Then a woman said,
“Wait a minute. I remembered something.
Last autumn I was worried about the trees, because the leaves gradually became brown.
I thought they were going to die.
But a month later their leaves became green again.
Maybe you are right.
They surely visited Ise Shrine, and came back here a month later with Nusa.”

All the villagers were deeply touched by the mysterious event.
Nobody doubted that the trees’ spirits visited the shrine for the villager’s happiness in the guise of human beings.
They gathered under the trees and worshiped them as the sacred trees.
The villagers soon collected money the same amount as the young couple’s debt that the innkeeper told them, and sent it to him.

If you visit that rural village, you can see the huge pine trees standing side by side in the precinct of the Suwa Shrine.
The trees may wait for you to come, as you know pine is ‘matsu’ in Japanese that means ‘wait’.