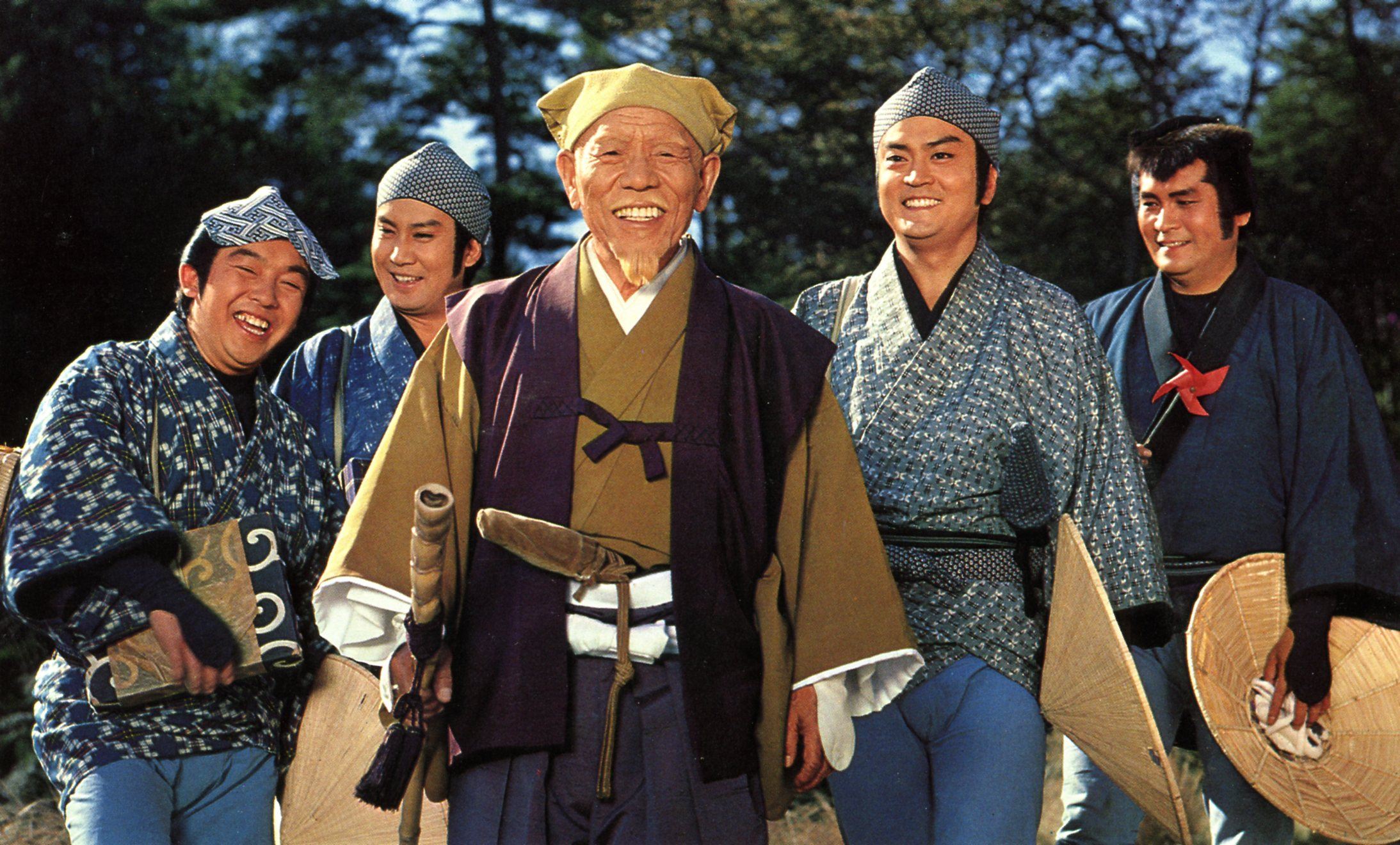 I think most of you like the stories of ‘Mito Komon.’
He is a real historical figure.
In the late Edo era, storytellers started talking about his episodes and those stories have become popular.
His real name is Mito Mitsukuni (1628-1700).
As he was the lord of feudal clan of Mito (Ibaraki Prefecture) and his official rank was Chunagon (it’s also called Komon), he was called Mito Komon.
When he was 63 years old, he retired and his nephew took over his position.
Besides he’d been a good lord, he’d devoted himself to studying Japanese history and wrote a history book (Dai-Nihonsi).
He also liked traveling.
You know that ‘Mito Komon’ showed up in a popular serial TV program in 1969, and it has continued to over 1,000 times.
I’ll tell you one of his episodes.

One day Komon and his followers were walking along the street during their trip.
It was such a fine day they were chatting with each other merrily, and about to enter a town.
Suddenly, a man came staggering towards them and bumped into them.
He looked injured, and was bleeding from his shoulder.
Komon said to Tobizaru,
“Look, Tobizaru. He is bleeding. Will you take care of him to stop the bleeding?”
Tobizaru tore his tenugui, or hand towel, and bandaged the man’s shoulder.
“What happened? Who on earth injured you?” Komon asked the man.
“I—I am a worker at the rice wholesaler, Dai—Daikoku—ya.
I—I happened to grasp their secret.
And they—at—attacked me suddenly.”
His voice became weaker and weaker, and finally passed away.
“Surely something bad is going on.
Guys, search the place he worked at, and find out what’s going on.
We have to do something.
Hurry up.”
Komon said.

Daikokuya was the biggest rice shop in the town so they found out the shop easily.
Ogin hid herself on the ceiling of the shop, and Tobizaru shadowed the shopkeeper for several days.
They patiently waited for someone coming to meet him, or he himself going out to meet someone.
Then they got some information that the shopkeeper would go out to a fancy Japanese-style restaurant to meet a man who worked for the lord of the province as Daikan, or a bailiff.
It was Ogin who was the expert who could disguise a waitress.
While she was serving sake, she made them feel at ease and it made them drop their guard.
She overheard the conversation between the two men behind the sliding door.
“Didn’t you notice anyone shadowing you?”
“Of course not. I’d never make such a blooper.”
“Did you bring the things, Daikokuya?”
“Of course, sir. Here you are,”
he untied a furoshiki or a wrapping clothe he brought, under it a wooden box appeared.

“Good. Now open it!”
Daikokuya opened the box, in which were laid 100 gold coins.
“Oh! I love the gold yellow color! Thanks for your trouble.”

Meanwhile, Yakichi sneaked into the storehouse of the rice shop and there he found a pile of straw rice bags- many, more than he’d expected to find.
Suke-san and Kaku-san gathered the facts from farmers that they were imposed severely, and that they were forced to pay rice as the extra tax besides their nengu or annual tributes.
Ogin, Yakichi, Suke-san, and Kaku-san hurried to tell Komon what they’d searched so far.
“You all have done good jobs.
I now understand what’s going on.
We have to save the poor people.
The bailiff and Daikokuya have to be punished.”

Komon visits the lord with Suke-san and Kaku-san, and tells him to stop gathering the extra taxes, but the lord says suspiciously,
“Who are you, old man?
What are you talking about?
We’ve never gathered such extra taxes you are telling me about.
I’m always thinking of my people.
But if you insist, you must have evidence.”

Then the bailiff suddenly cries,
“Here’re the rascals who are plotting to kill our lord.
Hey, everyone, let them have a fine day.”
people with swords gather around Komon and followers. Komon says,
“We have no choice. Suke-san, Kaku-san. Teach them a good lesson.”
Tobizaru, Ogin and Yashichi also appear on the battlefield, and fight on the Komon’s side.
First it looks like a one-sided game because there are lots of samurais and the other side is only 6.
But you see, the fewer is stronger.
Even Komon beats some samurais with his cane.
Suke-san, a master swordsman, never kills his opponents.
He only strikes them with the back of his sword.
Even so he beats lots of samurais.
Kaku-san, a master of judo, fights only with his two arms and hands.
But no one can beat him.
After a while, Komon says loudly,
“Suke-san, Kaku-san. I think it’s about time.”
Then Suke-san’s turn, he shouts,
“Sheathe your swords, every one!”
He takes the inro or the seal case out of his bosom with his right hand, holds it up high for them and continues,
“Listen to me.
Can’t you see this inro or seal case?
Who do you think the person standing beside me is?”
Everyone looks the seal case, on which the wild ginger trefoil coat of arms of the Tokugawa clan is painted.

Kaku-san adds his words,
“The very person right here in front of you is Mito Mitsukuni, the former Vice Shogun.
Don’t be haughty.
Sit down with your head down.”

Everyone including the lord is surprised and confounded, sits down on their knees with his head down in front of Komon and his followers.
Just then, Hachibei appears with Daikokuya.
He says,
“This man confessed.
The bailiff and Daikokuya himself plotted the extra taxes for their own sake.”

Komon accuses the bailiff,
“Your role should be to help the lord.
But you only thought of your own self, you did wrong conspiring with Daikokuya, and lined your own pocket.
Think of how the farmers here have been in agony because of the heavy taxes imposed.
You won’t be excused.
The lord will punish you heavily, I’m sure.”
He turns to the rice dealer,
“Daikokuya, You were doing rice trade illegally.
You must have offered a bribe to the chief counselor and got a chance to deal extra tax of rice, and have gotten huge profits.
You’ll loose your right to deal in rice forever.
The lord will exile you from this area at once.”

The lord, who is struck with awe, brought him back and orders his followers,
“Take them to the jail.
I’ll investigate them directly.”
And to Komon,
“I’m very sorry to have you seen such a terrible scene.
I should have noticed all that.
I am very much in fault.
I know no one but myself should blame this case.
Please forgive me.
I’ll be a good lord from now on.”

“I’ve heard you have a good son.
I think you’d better have him take over your position.
That’s all,”
he continues,
“I think your son needs your help.
You should make him a better lord than you.”

The next morning, they started keeping their travel.
They all looked radiant because the case ended successfully.
Komon also was in a good mood, he said,
“Now let’s go, shall we?” and laughed loudly,
“Ha-ha-ha!”