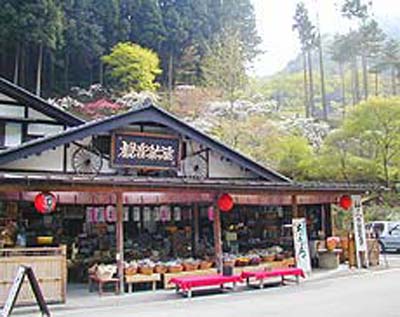 From the old days, manju, or buns, have been one of the popular snacks for Japanese people.
(Manju is a kind of bun with a bean-jam filling.)
So people could easily find a manju shop, especially in Edo era, if they wanted some to eat.
Manjus were also sold at some teahouses, where they served them with tea.

One day a traveler stopped by one of those teahouses to catch his breath.
It was a fine spring day.
Trees around there were covered with beautiful young leaves.
Here and there he could see some wild flowers.
And a gentle wind was blowing.
“This is a perfect place to rest,”
he thought.
He’d gotten tired from walking so long.
But sitting on a bench at the teahouse and having some manjus with tea made him relax and recover from fatigue.
He heard the murmur of the stream.
He cast his eyes a little far.
There was a stream between the teahouse and a mountain.
Then he spotted a boy fishing by the stream.
The traveler wanted to see the boy catch a fish with joy.
He waited a bit for the scene to come.
But the boy was sitting still.
He patiently waited a little longer.
But the boy didn’t get any.
The man finally got tired of waiting, and came up to him.
The boy, wearing shabby clothes, was still looking at the face of the stream silently and kept fishing.
The man quickly glanced at the boy’s empty creel.
He felt pity for the boy, so he spoke to him gently,

“Hi. Fine day, isn’t it, young man?
Are you enjoying fishing?
What are you fishing?”

“Hello, sir.
Nothing particular.
But I like fishing any way.”
His tone sounded discouraged.

“Well, don’t get too depressed, son.
We all have our ups and downs in life.
By the way, there’s a teahouse over there.
How about having a manju or two.
It’s my treat.
What do you say?”

“Oh, how thoughtful of you!
Thank you, sir.
I like manjus very much.”

The boy seemed delighted to accept his offer.
The man let the boy sit on the bench of the teahouse.
“Hey, bring me three manjus and a tea, please.
That’s my treat for this boy,”
he shouted to the woman inside the teahouse.

The man felt happy to see boys eating manjus.
“He is eating manjus like a pig.
It’s obvious that he’s been hungry.
I did a good thing for the poor boy,”
he felt self-satisfied.

As he felt warmly toward the boy, he asked him in a friendly way,
“I understand you didn’t have any catch today, right?
How many fish do you catch on an average?”
The boy, who had already finished eating, answered him with no trace of shyness.
“Well, usually two. But today I managed to catch three.”

“But you don’t have any in your creel.”
The boy smiled a bit at the man, pointed to him, and said,
“You are the third catch of mine today, sir.”
“—Me?
I’m your catch? Umm—excellent!”
The man gave him back an embarrassed smile.

He admitted he had fell into the boy’s trap.
Still he imagined that the boy looked so poor that he might be lonely and live by himself, or if he had his parents, they might be sick or have something wrong occurring to them.
He said to the boy tenderly,
“I admit that you won.
By the way, where do you live?
Are you living with your parents?”

“Of course I am.
May I introduce my parents?
That is my father over there, as you know, his manjus are delicious.
And this is my mother, she serves tea and manjus.”
The boy’s mother smiled, bowed her head deeply and said,
“Thank you so much, sir. Please come again.”
Now the traveler realized he was completely taken in.
Once he had felt refreshed and been ready to keep traveling, but then he got tired again.
He felt overcome with mental fatigue.
As you know, the young angler’s aim wasn’t fish but human beings like him.