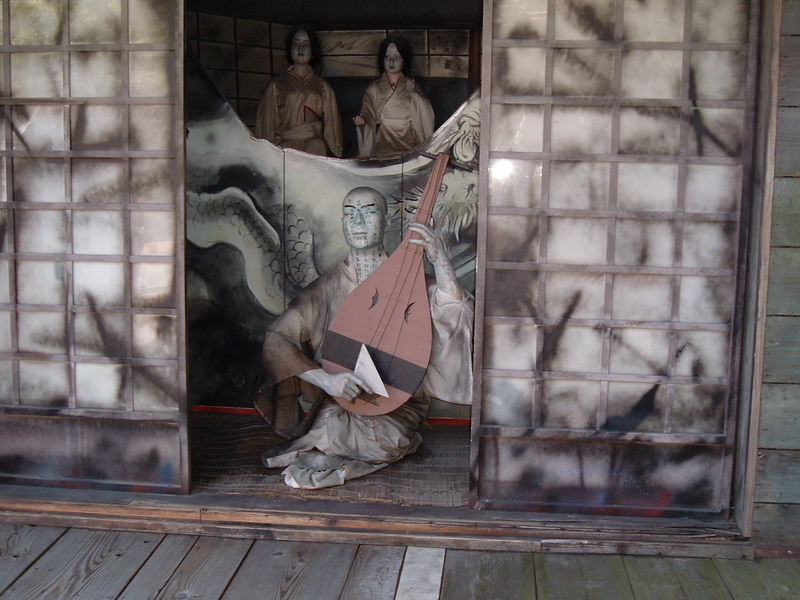 In the mid-12th century the Taira family defeated their rival the Minamoto family almost completely,
and once had a strong political and financial power.
But their heyday didn’t last forever.
The Minamoto family, which once had been destroyed badly and lost their power, rose again.
Taira-Minamoto war, or Gempei Disturbance, occurred from 1180 to 1185 between two warrior leagues, one under the Taira family and the other under the Minamoto family.
The battle of Dan-no-ura was the final one.
Dan-no-ura is off the southern tip of Honshu, Yamaguchi Prefecture.
The war ended with the crashing defeat of the Taira.
The major Taira figures were killed or committed suicide.
Later the tales of the war, known as Heike monogatari, or the Tale of the Heike, was spread all over Japan by blind lute priests called Biwa Hohshi. (Biwa is a Japanese lute with a bent neck and four strings. Hohshi is a priest.)
They dealt with the tales of the short heyday of the Taira family and the five years of the Taira-Minamoto war.
Guys, come and sit around me.
I’ll tell you a story I have been saving up to tell.
The hero of today’s story is a young blind priest named Hoh-ichi.
To tell the truth I don’t know exactly where he lived, maybe in a temple near Dan-no-ura.
You are asking me when?
It was, of course, after the Taira- Minamoto war.

Hoh-ichi enjoyed playing the lute more than anything else.
One evening he was playing the lute alone as usual, sitting in a room,
facing at the yard.
Then he heard someone coming toward him.
As I said he was blind. So he couldn’t see what the visitor was like.
“You are the famous lute player,
Hoh-ichi, aren’t you?
My master is eager to listen to your tales accompanied by the lute.
Will you come with me?
I’ll show you the way to the place.”

Because of the tone of the voice, he figured that some noble family sent the messenger, who was talking to him.
Hoh-ichi was grabbed his arm with a cold stiff hand.
He thought he was being led to a place where the messenger’s master was waiting for him.
As he was walking with the man, he heard some sounds.
From it he imagined that the messenger wore armor.
He felt the man stop him, and lead him into a room.
When he entered the room, he heard the hum of voices coming from all over the room.
“It must be a large room with lots of people,”
he thought.
“Maybe some women and children as well as men are sitting here,”
he thought.
Soon he heard a voice talk to him.
“Welcome to our place, Hoh-ichi.
I’d like to listen to your tales with the lute.
Will you start the tale with the battle of Dan-no-ura?”
“That must be the person who wants me to play the lute here,”
he said to himself.
Soon he started telling the tale of the battle of Dan-no-ura.
He played the lute with his heart and soul.
He felt that the audience was absorbedly listening to his music.
When he reached the saddest scene where lots of the Taira people, men and women including young emperor, threw themselves into the sea, one woman started weeping, and then others followed her.
Sounds of weeping and crying filled the room.
The tragedy finished with lots of tears.
Hoh-ichi himself was satisfied with his own performance.
Actually he was impressed with the reflection of his audience.
Then he heard the voice again,
“It was a wonderful performance.
We all are satisfied with it.
If you don’t mind, we’d like you to come and play it for us for several more nights.
We’ll give you a reward later.”

Then he was grabbed on his arm by the cold hand again. T
he man, who took him to the place, brought him back to his temple.
Before long, the chief priest of the temple noticed that the young priest looked like something was wrong.
Though he was blind, he had been a healthy young man, but he was becoming pale rapidly.
The old priest thought he might have been possessed by an evil spirit.
So he kept an eye on him for a while.
That evening, the old priest heard someone coming and calling the lute player,
“Hoh-ich, Hoh-ichi.”
But he could see no one around Hoh-ichi.
To his surprise, the young priest stood up with his lute under his arm, and started walking as if someone had been leading him.
In a hurry the old priest shadowed him.
It was getting dark.
But the lute player kept walking as if someone was strongly pulling him forward.
He was walking so fast that the old priest had almost lost sight of him.
Then the sounds of the lute came out of the darkness.
He strained his eyes in the darkness and found Hoh-ichi sitting out there in the field surrounded by some hitodama, or jack-o’-lanterns.
The sight gave the old priest goose bumps, and remembered that lots of the Taira people had been killed and abandoned there at the end of the war.
He was afraid that the young priest must have been obsessed with the Taira family’s spirits.
The following morning, the chief priest persuaded the victim not to go play the lute for the Taira family’s spirits.
“If you continue playing the lute for the spirits, you will eventually be killed.
There’s one thing I can do to save you, I mean, your life.
I’ll write sutras all over you from top to toe so that the messenger-spirit can’t see you.
If you speak just a word, you’ll be found.
Keep in mind that you must say nothing.
Don’t move. All right?”

It was becoming dark. An eerie warm breeze blew.
Then the voice came from outside,
“Hoh-ichi, Hoh-ichi.”
But the young priest didn’t answer.
He sat still as he’d been told.
“Where’s Hoh-ichi?
I can’t see anybody.
What’s happening with him?
What?
What are these?
They look like Hoh-ichi’s ears.
Well, I’ll take these ears instead of him.”

Poor Hoh-ichi! Sitting still, he toughed out fear and pain.
Thus and thus his ears were snapped off.
Seeing his bloody face, the old priest stood still voicelessly.
Then he brought him back, and apologized,
“I thought I’d written sutras on every part of your body, but I missed writing on your ears. I’m terribly sorry.”
Later they held a warmly respectful memorial service for the Taira family’s spirits.
Hoh-ichi was gaining more popularity than before as ‘The Tale of the Heike’ taleteller with the lute.
Soon people started calling him ‘Miminashi Hoh-ichi,’ or ‘Hoh-ichi without his ears.’