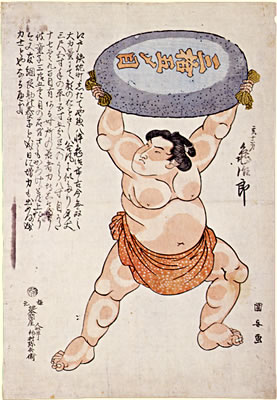 Long long ago, a strong young man lived with his parents in a mountainous village.
When he was born, his parents wished that he would become the strongest man in the country,
so they named him Rikitaro. (Riki means strength in Japanese.)
They called him Ricky for short.
Ricky grew up to be a tall strong man and helped his parents a lot,
but what they worried about was that their son didn’t speak a word until he reached twenty years.
One day, as the young man was sitting in front of his parents, he suddenly started speaking,
“Father, Mother, I desperately need an iron bar.
Please have the smith make a big iron bar.
It should weigh at least 200 kilograms.”
He could finally speak!
How happy they felt!
But they were very surprised, of course.
“Did you hear him?
He’s finally spoken to us.
But he needs a 200-kg iron bar?
What for?”
the father said to his wife.

“Anyway I’ll go order an iron bar from the smith.”

A week later, dripping with sweat, four strong men came to their house carrying the huge iron bar on their shoulders.
To their great surprise, Ricky could hold the heavy iron bar quite easily and swing it as if he was a baseball player swinging his own bat.

A few days later he sat in front of his parents again and said,
“I’d like to travel around the country.
On my way I might have some difficulties.
I think these experiences will give me the chance to develop my abilities,
and I might be able to help someone in need.
Please give me a permission to leave.
After three years, I’ll come back here and live with you.”

“We’ll miss you, but it will be a good chance to find yourself,”
said his mother.
Like Momotaro (a hero in one of the old Japanese stories),
he took some rice balls his mother had made, and set out on his journey to discover his strength and test his ability.
When he walked near the mountain path, he saw a big man coming toward him.
The man was rolling a big rock down the path.
“Look, a man is coming toward me, rolling down a big rock along the narrow path.
What a nuisance that is!
He should think about other people passing through.
Wait a minute, he must be strong enough to try my strength.”
He stopped walking and waited for the rock coming.
He could strike right in the middle of the rock with his iron bar.
The sound was like a crash of thunder.
And the rock flew far away like a soccer ball.
“Are you the man who hit my rock?
Tell me your name,”
said the man angrily in a loud voice.

“No kidding.
People say I’m the strongest man in the country.
Don’t be surprised to hear my name.
I am Iwataro, as hard as rock. (Iwa means a rock in Japanese.)”

“If you say so, it may be true that you are the strongest man, but why don’t we have a sumo bout
and find out who is really the stronger?”
said Ricky.

“Great.
Now I can show you how strong I am! Come on!”
The two fought each other for a while.
Then Ricky grabbed his opponent’s waist and lifted him up, and threw him into a rice paddy.
He landed with a big splash.
Soon he stood up and came back to the place where Ricky was anxiously looking at him.
“You are the strongest man in the country.
I’ve been looking for someone who is stronger than I am.
Now I have no objection to working for you.
Please call me Ian.”

“All right, Ian. Follow me.”
Ricky was proudly accompanied by Ian and kept walking.
Before long they came across a stranger with a big barrel on his head.
He was as big as the two and looked strong.
“He must be strong enough to test my strength,”
said Ricky to himself,
“But look, he has a big barrel over his head and is walking along the narrow path.
What a nuisance that is!
He should think about other people passing through.”
He hit the big barrel with his iron bar.
With a big crack, it broke into pieces like a watermelon.
“Are you the man who broke my barrel?
Tell me your name,”
said the man angrily in a loud voice.

“No kidding.
People say I’m the strongest man in the country.
Don’t be surprised to hear my name.
I am Tarutaro, as strong as a barrel. (Taru means a barrel in Japanese.)”

“If you say so, you may be the strongest man, but why don’t we have a sumo bout to find out who is really the stronger.”
said Ricky.

“Great. Now I can show you how strong I am!”
“Wait a minute. First, you should compete with my fellow, Ian.”

“All right. Come on!”
The two fought against each other.
Soon their faces turned red.
It was a close match, and neither of them could beat the opponent.
“Stop it.
You are as strong as Ian.
Now it’s my turn to have a bout with you,”
said Ricky.
Soon he grabbed Tarutaro by the neck and threw him far away into a swamp with a big splash.
Tarutaro landed at the far end of the swamp, but he managed to get back to the place where Ricky and Ian were waiting for him.
“You are the strongest man in the country.
I’ve been looking for someone who is stronger than I am.
Now I have no objection to working for you. Please call me Terry.”

The three strong men started traveling again.
A few days later, they encountered a big, but strangely quiet city.
There was no sound of children playing or crying.
They couldn’t see anybody.
Not even a dog or a cat running through the streets.
At last they found a young woman sobbing under the eaves of a house.

“What’s wrong with you? Why are you crying like this?” Ricky asked.
“It’s a snake, the monster snake.
I don’t want to be killed.
But I am to be eaten today.
It sneaked into the city about a week ago.
Since then every night it has gone out and eaten young women one after another.
The rest of the people are terribly frightened and hiding in their houses.
It’s my turn to be eaten tonight,” the woman wept.

“What a cruel animal it is!
We should get rid of it.”
Ricky said to the two.
The three men waited for the monster snake to show up at her house for a long time.
Finally it appeared.
It broke down the door, and crawled into the room where they were hiding.
It was a huge horrible snake with glittery red eyes.
Just as it opened its mouth to eat her and reached out its red tongue to touch her, Ian jumped on its back, and Terry grabbed its tail.
Then Ricky gave it a fatal knock on his head with his heavy iron bar.
Not only the young woman but all the people in the city thanked the three men for their act of bravery.
They talked with each other about the incident that night as if they’d been there and watched the battle.
The chief of the city said,
“I’d been worried about the tragedy, but I couldn’t do anything.
As you see, I am old.
If you would help me, and live here as long as you could, I’d be glad to, and all the people would be relieved.”
Ricky thought about it for a moment and said,
“I don’t know if it’s the right thing for me to do.
I don’t have any experience in politics so far.
So I need to learn a lot from you.
Anyway I don’t mind staying here.”
The chief was very glad to hear that and said,
“We are going to build a house which is large enough for three of you.”
A beautiful house was soon built as the old chief promised.
It was as big as a castle.
Ricky thought about his old parents.
“Maybe they’ve been lonely without me.”
Soon his parents were invited to the castle-like house, and they lived together with their own son Ricky,
and his fellows Ian and Terry.
Ricky and two fellows started helping the old chief.
Their life looked peaceful and happy, but soon they got tired of it.
One day Ricky said to the chief,
“We are getting tired of this peaceful life.
I’m not suitable for such deskwork.
I’d rather be involved some industrial work, such as cutting trees in the forests and making fields, building bridges and houses for people…”
Thanks to them, the city became one of the most industrial and prosperous places in the country.