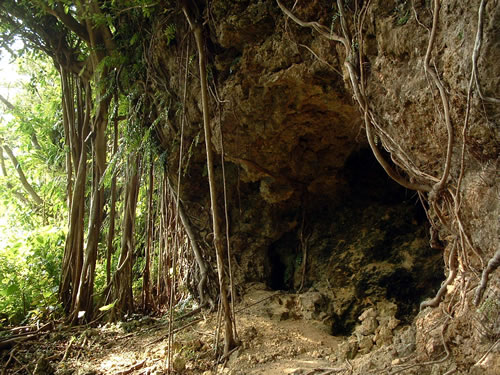 Long long ago, there was a small village at the foot of the rocky mountain.
In the cliff of the mountain, a large cave could be seen even from the distance.
Nobody had tried to enter the cave, because its inside was very dark and it looked very long, and scary.
But strange to say, villagers used the cave as if it was their own cupboard, storing countless dishes and things.
They borrowed dinner sets they needed for special occasions such as festivals, weddings, or funerals.
So they could invite as many guests as they wanted without being worried about dinner sets.
The way to borrow those things was very easy.
They only stood in front of the cave, and asked it like this,

“Hello. I’m So-and so, one of the villagers.
I’m going to have a wedding ceremony with a reception for my son at my house tomorrow.
I’m inviting 30 guests.
But I only have 10 dinner sets.
Would you be kind enough to lend me 20 dinner sets for the rest of my guests?
I’ll come here to fetch them early tomorrow morning.”
Following morning, those things were surely prepared and put on the ground in front of the cave.
No one failed to get things they asked for the previous day.
After finishing the event, they came there again and stood in front of the cave in order to give back the things they had used.
With their appreciation, they said,
I’m So-and so. My son’s wedding ceremony ended without any problems.
I really appreciate your help.
Thank you so much.
I’ll put them all here on the ground.
They’ve been washed cleanly, and I’m sure they have no cracks, but would you check them all, and keep them again?
Thank you again.”

People believed they should return home without looking back at the cave.
So no one knew the fact that all the things put there in front of the cave disappeared in a flash as soon as they turned their backs to the cave.
Most villagers were honest, and hardworking people.
But Tagosaku, a farmer, wasn’t.
One day he went to the cave and said,
“Listen to me. I’m Tagosaku, one of the villagers.
My daughter’s wedding ceremony is going to be held tomorrow, and we have 50 guests.
But I only own 5 dinner sets. Will you lend me 45 sets for the rest of my guests?
I’ll come here early tomorrow morning.”
To tell the truth, he didn’t have a daughter.
He didn’t intend to come back to the cave to give them back, either.
Instead he went to town to sell them all.
Those rice bowls, tea cups, dishes and others were high quality pottery and lacquerware.
So he could sell them at high prices.
At first he was a little bit afraid of being punished for his dishonest act.
But nothing happened.
Can you believe this!
He went to the cave again to borrow dishes to sell them!
Again nothing happened.
What a nerve he’s got!
Without hesitation, he repeatedly borrowed things and sold them several times!
Once he had a chance to earn money without working, it might be hard for him to forget the taste.
Thus he became rich. But his wife didn’t look happy.
He heard his wife sighing.
He asked her why she was sighing.
She said,
“I really want a baby.
We are rich now.
But we don’t have any kids.
I’m afraid we’ll have a lonely life in the future.”

He came to the cave to ask something different for the first time.
“Hello. I’m Tagosaku.
We have no children.
We want a baby.
Please help us to let our dream come true.”
He thought that his wish was too difficult to be realized.
But soon his wife had a baby boy.
How happy they were!
A few years had passed.
It was high time the baby had started standing, walking, and talking.
However, he even didn’t try to do a single movement, but just kept lying and crying.
Tagosaku and his wife started worrying about their child.
In the end they have to admit that their child wasn’t an ordinary one.
More years had passed and the boy became ten years old.
One fine autumn day Tagosaku and his wife were packing rice into straw bags in their front yard.
Their son, who was lying on the futon as usual, was gazing at them working from the room.
Look, what’s happening! —— The boy suddenly stands up and starts walking toward piles of straw rice bags.
It gives the couple a big surprise.
“Our son can stand and walk. It’s miraculous! It’s wondrous!”
But soon their surprise turns into joy.
The boy stops in front of his parents and the piles of straw bags of rice.
To their amazement, he shoulders two heavy bags of rice at once!
He is murmuring something.
But at first, it’s hard to hear.
Then he starts running with the rice bags abruptly.
The couple, who are taken aback by the sight for a while, rush to follow him.
Now they clearly hear him chanting,
“I’ve got to go to the cave in the cliff.
I’ve got to go to the cave in the cliff.”
“What a surprise! Our son is speaking.”
That’s another surprise for them.
“But I wonder why he’s got to go to the cave.”
While they are puzzled and try to find out the answer, the boy is keeping running.
He looks like he has wings on his back.
He runs so fast that his parents can’t catch up with him.
Soon he reaches the entrance of the cave.
“Stop! Don’t enter the cave,”
they cry from the distance.
But their son disappears into the dark cave.
It looks like the cave sucked him up in a flash. ——.

They were gasping and panting for a while when they finally reached the cave.
It was too late.
They couldn’t see even their son’s footprints.
They cried his name at the top of their voice.
First they only heard the echoes.
Then a strange scary voice came out of the cave.
“I’ve got a boy with two straw bags of rice in order to make up for my loss.”
The boy never returned home.
After the incident, villagers called it “the Child-Eating Cave.”