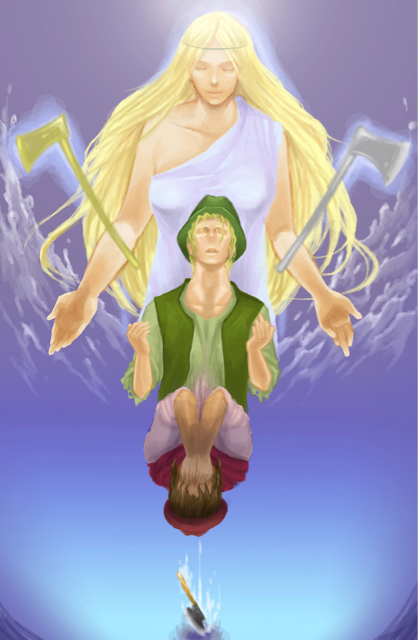 Long long ago, a poor but honest woodcutter and his sickly wife lived near the forest.
The man worked very hard cutting firewood in the forest, and sold it in town.
But he could hardly pay for his wife’s medicine.
One late afternoon, when the sun was slowly sinking in the sky, he was still working with his ax right by the lake in the forest.
One more swing and the tree would be split, and then, he thought, he could go home.
But the last swing of the ax missed its landing on the tree.
It flew swiftly through the trees and fell into the small lake.
“Splash.”
The ax disappeared immediately into the water.
He rushed to the edge of the lake, and knelt down to look into the water where his ax had fallen.
How disappointed he was to lose it!
An old, very ordinary iron ax, but no spot of rust was there since he’d sharpened it every after work.
It was a precious ax for him to support his living.
He heaved a deep sigh and mumbled,

“That’s the only ax I have. I can’t work any more without it. What shall I do?”
Just then a mist came from the water.
A shimmering soul appeared from it.
He was wide-eyed with astonishment to see her.
“Oh, don’t afraid of me.
I am the Spirit of the Lake.
You look so sad.
What’s happened?”
she asked.

“I’ve just lost my ax.
It was the only ax I had.
I can’t work without it,”
he answered weakly.

“Oh dear! That must be a big problem for you.
All right, maybe I can help you,”
she said sympathetically, then plunged into the water.
A few minutes later she reappeared with an ax in her hands.

“Is this ax yours?”
she asked.
It was a glittering golden ax.

saying this, the Spirit of the Lake dived again.
Soon she emerged with a silver ax in her hands.
“Now look at this. It must be yours.”

“Sorry, it’s not my ax, either.
Mine is an ordinary iron ax with a wooden handle.
It’s not a glittery one like that, but it’s good enough for me to cut trees.
Oh, I wish I had it again!” he said hopelessly.

The Spirit of the Lake dived into the water again.
When she came back, she had the iron ax in her hands.
As soon as he looked at it, his face lit up.
“Oh, that one’s mine.
My old ax. What a relief!
I can’t thank you enough,”
he cried.

“Thanks to your help, I’ve regained my old ax.
How happy I am!
But it’s started getting dark.
It’s time to return home.
Thank you again.”

“Wait, wait a minute,”
the Spirit of the Lake made the woodcutter stop walking off, and dived into the water again, but soon came up with the two axes, the golden one and the silver one in her arms.
“You are a very rare honest man.
Your honesty and sincerity moved me a great deal.
I’ll give you these two axes.”

“Are you giving me the golden and silver axes?
Why, thank you, thanks a lot.”
“And if you were granted one wish, what would it be?” she asked.

“Nothing—um, to tell the truth, I have a sick wife who’s been in bed for years.
I do hope she’ll get well as she used to be.
That’s the only wish I have.”
When he came home, he found that his wife was preparing dinner, singing merrily.
It looked like she’d completely recovered from her illness.
The husband showed her the beautiful axes he brought, and told her how he’d gotten them.
Needless to say, they spent a very happy night.
A few days later, one of their neighbor woodcutters visited his house, and glanced at the two unfamiliar axes on the wall next to the old one.
“Are those yours?
A gold one and a silver one, right?
I’ve never seen such beautiful axes before.
Where and how did you get them?”
he asked suspiciously but enviously.
The honest woodcutter didn’t hesitate to tell him about his strange experience.
The neighbor woodcutter hurried to the lake with his rusty ax, and threw it in the water.
Then he cried loudly as if he was in trouble,
“Alas! What shall I do?”
Soon the Spirit of the Lake appeared.
“Why are you crying?” she asked.
“I dropped my ax in the water accidentally.
I can’t work without it.
What shall I do?”
he said and shed crocodile tears.
“Oh, dear. Maybe I can help you.”
She dived into the water, and soon appeared with a golden ax.
As soon as he looked at it, he cried in a loud voice,
“Oh, yes. That’s the ax I lost. Thank you so much.”
He shot out his both hands to the Spirit of the lake.
“You, liar! I hate such dishonest people.
You can’t have your own ax, either,”
no sooner had she said that than she plunged into the water, and never emerged again.
The greedy dishonest man went home, dejected in his heart.
He failed to get the golden ax.
Not only that, he lost his own ax, either.
How would he be able to work without his ax from then on?
Feeling entirely lost, he trudged home.
When he was about to open the front door, he heard his wife groaning.
He was puzzled, since she had been as fit as a fiddle.
Timidly he opened the door.
His wife, who was crouching down there, told him that she’d broken her leg.
Enduring the pain, she continued telling him when it’d happened.
It seemed like she’d broken her leg at the same time that he’d said to the Spirit of the Lake,
“Oh, yes. That’s the ax I lost. Thank you very much.”