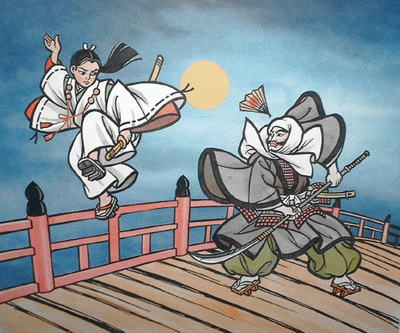 In the 12century, the late Heian period in Japan, the Taira family was at the height of its prosperity while their opponent the Minamoto family had almost perished.
You can see what was happening on one of the bridges in Kyoto, the capital at that time.
Nobody but a big monk is on the Gojyo Bridge with a Naginata, or Japanese halberd(one of Japanese arms which has a wide sword on top of the long shaft), under his arm, standing firm with his feet a little apart.
The moon is very beautiful, and it is shining on the bridge of Gojyo.
Look, someone is coming toward the monk playing the flute.
How beautiful the sounds are!
But you can’t see the player’s face clearly because he wears a sheer silk kimono over his head.
He has a sword on his waist, which looks precious.
The monk notices the player’s beautiful sword.
He yells out at the person playing the flute.
“I’m determined to get one thousand swords.
I already gathered 999 of them in my inventory.
One more sword and my collection will be perfect.”

But the man is still playing the flute calmly and just about passing by the monk.

“Hey, wait a minute.
As I said I’m gathering one thousand swords.
One more sword and my collection will be perfect.
You have a good sword on your waist.
If you give it to me immediately, I won’t hurt you.
You can go away as you like.”

The person stops playing the flute, and takes off the kimono from his head.
Look! What a noble and clear-cut features he has!
With a calm, composed voice, he says,
“You’ve gathered nine hundred ninety-nine swords, right?
But what you are doing is nothing but mugging.”

The monk shouts loudly,
“Shut up! If you don’t want to give it to me, I’ll take it from you by force.
It’s going to be mine any minute.”

The young man who doesn’t appear to be afraid of the monk, says,
“Take it, if you can.”

Then the monk raises his halberd over his head to threaten the young man.
In most cases, his victims are scared of him, leave their swords, and run away.
But the young man isn’t.
He dodges the attack nimbly.
The monk’s halberd slices nothing but air.
He looks a little bit upset, and tries to do one more attack, but—he loses sight of the young man.
“Where on earth is the boy hiding?”
he shouts.
“Here I am, Monk.”
The voice is from behind.
“None of your impudence!”
The monk’s face turns red with anger.
He tries again.
This time the young man jumps lightly like a bird and stands on the railing of the bridge.
When he jumps, he knocks the monk’s halberd down with his flute.
The monk is panicked and tries to pick it up, but before he does, the young man jumps down on the halberd.
“Now you know you can’t get my sword easily,”
the young man says to his opponent.
“You win, I give up.
Now I understand you must be famous in this field.

Please tell me your name.
I ought to have said first that I am a warrior monk called Benkei,”
he accepts his defeat gracefully,
“I’ll be your loyal retainer from now on.”
The young man says,
“My name is Ushiwaka.
My father Minamoto-no-Yoshitomo was the head of the Minamoto family, but he was killed by the Taira family during the Heiji disturbance.
Some day I should beat the Taira family completely.
So I do need some loyal retainers.
You can be the first of my own.”

This is an episode showing how Ushiwaka met his loyal retainer Benkei for the first time.
Later Ushiwaka was called Minamoto-no-Kuro-Hangan-Yoshitsune (1159-1189).
He reunited with his brother Yoritomo soon after the battle of Fujigawa against Taira.
They swore to avenge their father’s death on the Taira family.
Benkei was said to be a man of extraordinary cunning, strength and martial skill.
He accompanied Yoshitsune through all the campaigns of the Taira-Minamoto war (1180-1185).
Yoshitsune devoted himself to defeat the Taira family.
When his duty was completed to wipe out their rival family at Dan-no-Ura, he expected to have his brother Yoritomo thank him for his long and hard service.
But the suspicious brother Yoritomo wasn’t pleased to meet his younger brother returning in triumphant.
Yoritomo, who opened Japan’s first warrior government, Kamakura Shogunate, refused his own brother entry to Kamakura.
The younger brother was very aggrieved and wrote a letter to his brother asking for his forgiveness.
But finally he felt his brother’s deep hostility.
He sought the protection of Oshu Fujiwara family in Hiraizumi, as the head of the Fujiwara family had once sheltered Yoshitsune when he was young.
But after the head’s death, under pressure from Yoritomo, his son forced Yoshitsune to commit suicide.

You’ll be surprised that Yoshitsune is still one of the popular historical heroes among Japanese people.
He has been immortalized as a tragic hero.
Even after he was said to have died, stories that he was alive in Ezo (now in Hokkaido) or Mongolia circulated, and some legends said that Genghis Khan and a tragic hero Yoshitsune were the same person.