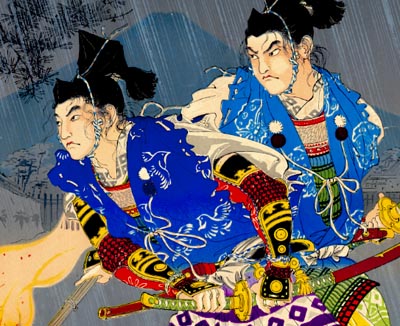 In the 12th century, the late Heian period, several families possessed their lands in the east part of Japan.
Sometimes they tried to expand their territories.
And that caused fighting and battles.
Between the two lords, Kudo and Ito in Izu area, there had been having territory trouble for many years.
One day Kudo tried to kill Ito during a hunt, and made his men shoot from distance.
One of the arrows they shot almost caught Ito.
But accidentally the arrow hit a man standing by Ito.
The man who was killed was Kawazu-Saburo.
His wife and two sons heard the sad news.
Soon Kawazu’s body was sent to them.
The wife cried and wept.
She patted her two son’s heads and said,

“Listen, your father was killed by Kudo.
You both are too young to understand, but when you will grow up, I want you to get revenge for your father.”

The younger son, who was only 3 years old, didn’t understand what she said, but the elder, 5 years old, stared at his father’s face lying in front of them and said,
“I swear that some day I’ll get revenge for him.”

Their stepfather loved the two boys.
But Juro never forgot his mother’s words.
Several years had passed.
When they were playing in the yard, five wild geese were flying in the sky.
Looking at the wild geese, Juro said to Goro,
“Look at them.
They were flying in a line.
Maybe the two are parents’geese and the three are their children.
I live with you and our mother.
But Soga is our stepfather.
Our real father was killed by Kudo.
I’ve missed my biological father.”

His brother said,
“When I meet Kudo, I’ll shoot him and cut his head.”

“Be quiet.
Don’t tell anyone about our plan.
It’s a secret between us,”

Juro reproved his brother for his careless loud voice.
Since then they had gone through a hard life, seeking Kudo’s life in revenge.
But they had no chance for a long time.
In 1192, after the Minamoto family completely defeated the Taira family, Minamoto-Yoritomo opened the Kamakura Shogunate, the first samurai government.
Next year, Yoritomo had a hunt on a great scale at the foot of Mt. Fuji.
When the brothers heard the news, they thought it was the last chance to revenge their father’s death.
When Shogun went hunting, he was accompanied with lots of followers.
The brothers slipped into them and found the place where Kudo would stay that night.
Actually they could spot him several times during the day when they were hunting, but he was always surrounded by people and no chance to approach him.

On the very day they hid themselves behind a big rock and talked about how to approach Kudo’s place.
But the waterfall nearby made a roaring sound, so they couldn’t hear each other’s voices.
They prayed God and Buddha to stop the sounds for a while as they were doing a very important talk.
They say that the sounds of waterfall really stopped a bit while they were talking.
They look around where people are staying.
They guess that Kudo’s place must be near Shogun’s place.
The moon shows up from the clouds for a while, so they can identify their enemy’s place.
Then the moon hides behind the clouds. Soon heavy rain falls.
That can help them sneak into Kudo’s room easily.
It’s almost midnight and Kudo is fast asleep.
“Wake up Kudo! I am Kawazu-Saburo’s son, Juro.”
“I am his younger son Goro. Now you pay your debt of revenge to our father!”
When Kudo’s hand almost reaches to his sword, Juro slashes at Kudo from his left shoulder to right armpit.
Jiro also cuts his waist and finishes by a stab.
Soon after that they shout with loud voices,
“We are Kawazu-Saburo’s sons: Juro-Sukenari and Goro-Tokimune.
We’ve just slain Kudo-Suketsune as he killed our father Kawazu-Saburo.
We’ve attended the long cherished object.”

Soon Kudo’s men surrounded the two.
Then other people came.
The two fought bravely.
But during the fight Juro was killed and Goro was at last captured.
The next day Goro was dragged in front of Shogun Yoritomo, and got an investigation.
Kudo was one of Shogun Yoritomo’s favorite retainers.
So Goro knew their successful vengeance led nothing but his death.
He wasn’t afraid to tell Shogun about Kudo who’d had his men kill their father.
He also told him how they had spent their life for 18 years.
As you know Yoritomo himself had a hard life as an exile when he was young.
Not only Yoritomo but also people around them were moved with their filial duties.
Yoritomo wanted to save his life.
But he couldn’t, because Kudo’s son begged Shogun to give Goro a death, as he killed his father Kudo.
Goro said,
“Give me a death.
I’ve been resolved to die.
I want to meet my father and brother in the next world as soon as possible.”

At that time, Juro was 22 years old and Goro 20.
This is one of the famous revenge stories in Japan, ‘Soga monogatari’ or Soga Brother’s tale written in late Kamakura period.
Because people love this story, people have been enjoying the drama especially in kabuki world.
Things related to Soga Brothers are around there, such as Jozenji, the temple that houses the brother’s graves, is in Odawara City.
Otodome-no-Taki, or the Waterfall which the sounds was stopped, is in Fujnomiya.
Kakure-Iwa, or the Rock where the brother hid, is near the waterfall.