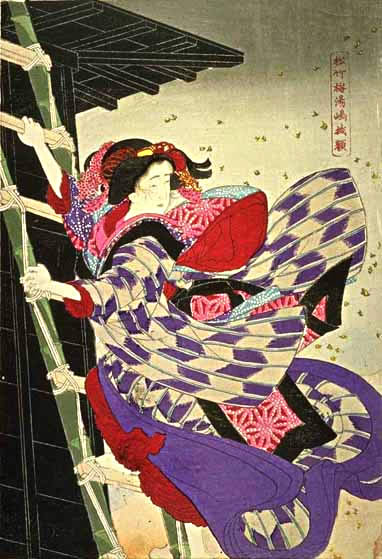 The family returned home to Hongo.
But Oshichi lost her energy to do anything.
She couldn’t find anything worth living for except for the young man’s letters, which reminded her of the happy days with him.

It was snowing on February 14th, when the owner of the greengrocer’s said to his daughter,

“I don’t think we will have many customers as it’s snowing today.
Your mother and I, have to visit my sick sister.
We won’t return home until late at night.
Look after the store and be sure to lock the doors after dark.”

They went out together in the snow, leaving their daughter alone at home.
Soon someone came to the shop.
“Hello! Is anyone there?”
It sounded Kichisaburo’s voice.
She hurried to the door.
“Ki…chi…sama…? Oh, Kichi-sama!”
looking at him, she threw herself into his arms.
“I missed you so much! Oshichi!”
saying, he hugged her.
“Me too! Oh, you are so cold,”
touching his hands, she said,
“Uh…you came all the way to see me in spite of the heavy snow, didn’t you?”

“I wanted to see you so much. Before I knew I was headed to this direction.”
“Kichi-sama… It’s so cold here. Come into my room.”

“Uh…I’m afraid your parents will…”
“They are out today. They won’t return home until late at night.”

She led him into her room.
Their joyful hours flew swiftly.
A few hours had already passed.
But they felt that it was as short as a few minutes.
Then they heard someone knocking on the door.
“Oshichi! Oshichi! We are home!”

“It’s my parents.
Stay here and hide yourself in my futon!”
she pushed him into her futon and opened the door with a look of feint innocence.

“How was Aunt going?
Is she all right?
I’ll visit her sometime, too.”
She said.

“Oh, she is better.
It’s so cold out there.
We’d better go to bed.
Good night, dear,”
said her mother.

“If only the time stopped so that the next morning would never come!”
they wished.
To their regret, it was already the crack of dawn.

“I have to leave before your parents get up,”
he whispered sadly, and sneaked out of the house.
“Kichi-sama. I wonder if I will see you again,”
she murmured to his back.

Kichisaburo walked back all the way to the temple in a heavy snow.
He felt dead tired walking, yet he reached the temple somehow.
But he collapsed and fell unconscious.
The priest was very surprised.
A doctor was called, but he couldn’t make a clear diagnosis.
Kichisaburo was hovered between life and death for several weeks.

On the 2nd of March 1863, Oshichi opened the window.
She felt a strong wind on her cheeks.
Oshichi had never spent a single day or night without thinking of Kichisaburo since she had returned home.

Oshichi missed him too much and lost control of herself.
She set fire to her house unconsciously.
But when it began burning, she came to herself.
She got frightened by what she had done.
Oshichi ran out of the burning house, climbed herself up the fire tower and pounded the fire bell.
She cried crazily,
“Fire! Fire!”
People nearby gathered in an instant and extinguished the fire.
Fortunately, it was soon put down and ended up being a small fire.
Yet arson was a serious offence.
Soon Oshichi was arrested on suspicion of setting fire to her father’s house.
She was taken to the Southern Bugyosyo, the office of the southern town magistrate.
She was dragged before the magistrate,
“Greengrocer Hachibei’s daughter, Oshichi.
Raise your chin!
According to the report, you set fire to your father’s house.
Is it true?”

“Yes, you are right. I did it.”
“You know well, don’t you?
Arson is a felony.
That means you’ll be sentenced to burn to death.
Tell us why you set the fire,”
he said.

Sitting, having her hands tied behind her back, she put her head up.
She didn’t look abashed in the least.
“I wanted to meet Kichisaburo-sama.
That was the only reason.
But now I’m regretting the fire.
It was very stupid of me.
I’m ready to accept any punishment sentenced.”

“Well…, even if it was a small fire, arson is a big crime.
You can’t avoid the death penalty.
By the way, you are 15 years old, aren’t you?”
The magistrate felt compassion for Oshichi, because she was pretty young, and it didn’t turn out to be a big fire;
obviously her first love drove her to arson.
He wanted to apply a regulation;
a person under 15 shall not be given the death penalty but be sent to a deserted island.

There were no other choices;
the magistrate had to pronounce a death sentence on her.
Oshichi was paraded through the streets before getting the death penalty.

“It was a small fire, wasn’t it? Don’t you think it’s barbarous to put her to death?”
“But arson is one of the big crimes. She is a dreadful woman.”
“By the way, her boyfriend has never showed up. How cold he is!”

Looking at Oshichi, people by the roads whispered with each other like this, while she always showed fortitude.
On 29th of March 1683, Oshichi was burned at the stake at Suzugamori in Shinagawa , a place of execution.
An officer handed a twig of cherry blossoms to Oshichi who was walking up to the scaffold.
“Take this to the next world, Oshichi.”
“Thank you very much, sir,” she smiled at him.
How sorrowful my life is!
Leaving my name in the spring wind, I’m gonna die today with cherry blossoms.
This is her farewell poem.
They had her head exposed to public for another ten days.
In the meantime, ‘Kichisaburo’ was still ill in bed when Oshichi left to the other world.
It was 100 days after her death that he knew she had received the death penalty.
He hurried to her grave in the temple.
“This new grave must be Oshichi’s.
I’m so sad.
I’m the very man that caused her to get the death penalty,”
holding her grave, he cried.
He remembered the promise he had made that night they spent together;
‘We will be together in the next world.”
“I will be with you right now, Oshich.”
He took out a dagger from the inside of the bosom of his kimono.
“Wait! What are you doing?”
The priest swatted his arm to drop the dagger.
“It’s a nuisance for the temple if you commit suicide here.
How could I make an apology to your parents?”
said the priest in an angry voice.
“That’s right! Oshichi herself won’t be pleased by your death,”
Oshichi’s father remonstrated with him not to commit suicide.

“Listen! ‘I’d like Kichi-sama to pray for my next world.’ This is my daughter’s last word for you. Oh, Oshichi!”
said her mother and wept.
It was not so long before he had his head shaved to become a priest at the Myoohin temple in Meguro.
He changed his name Saiun.
He always walked around to pray for Oshichi, his loved one, striking a bell hanging from his neck.
After long years of hard ascetic practices, he built a shrine for prayers called Nenbutsu-do at the Myoohin temple.

Later, a kabuki writer told the couple’s sad episode in his drama, so that their names passed down from generation to generation.
The wooden statue of ‘Saiun Priest’ and stone statue of ‘Oshichi-jizo’ are enshrined in the Daienji Temple in Meguro, Tokyo.
You can see a stone monument of Saiun and one more statue of ‘Oshichi-jizo’ at a corner of the grounds of the temple, too.
It is said lots of young women who visit the temple wish to have the same passion for love as Oshichi had.